Senator Orji Uzor Kalu had  in his opening remark on behalf of the Deputy Senate President and Chairman Senate Committee on review of the 1999 constitution, Ovie Omo Agege advocated for the devolution of powers,Judicial and Electoral Reforms and Local Government Autonomy. 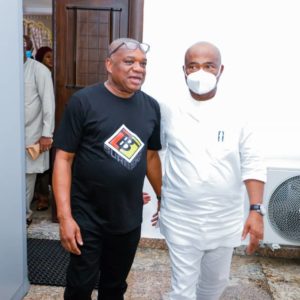 According to Kalu” The Senate has decided to adopt a bottom-top approach by first listening to Nigerians at the geo-political level. This approach underscores the critical importance the Constitution Review Committee places on the subnational levels of governance in Nigeria.

“There’s a need to address, by way of Constitutional Amendments, topical issues like Judicial and Electoral Reforms, Local Government Autonomy, and devolution of powers.

“The Senate Committee on the Review of the Constitution is mindful of the recurring clamour for constitutional amendment or review over the years.

“Since the return to constitutional democracy in 1999, many have argued that the 1999 Constitution is not a people’s constitution. In other words, it has been argued that it was written and forced down on us by the military without any input from “We, the people”. 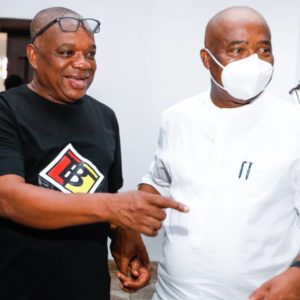 Senator Kalu assured of the Senate’s preparedness to amend the nation’s constitution to reflect the interest and current challenges of Nigerians.

He said ; “Undoubtedly, this places on us, the Senate and our counterparts in the House of Representatives, a herculean task of giving the people a Constitution that speaks to these challenges and one which our citizens can truly call their own.

Declaring the event open, Governor of Imo State Hope Uzodinma ascribed the various agitation in the country to the defects in the current 1999 constitution saying the legal document was inherited from the military government and lacks democratic inputs.

He said “For some time now there has been a series of agitation from various strata of the society seeking to review our Constitution that we inherited in 1999 from the military Government.

“The major problem of our constitution is that it was prepared by the military and therefore did not take into consideration the legislative input.

“This hearing provides the opportunity for those of us in Imo and Abia states to make our input on the amendment we seek in the current 1999 constitution.

“It offers another opportunity for us to continue to work hard for an acceptable constitution that will meet the aspirations of Nigerians in general. This also provides for us in the Southeast to address those issues that have been bothering us in the recent past.

On his part the Governor of Abia State , represented by his Chief of Staff ACB Agbazuere called for devolution of powers, state and local government policing and fiscal federalism.

“The National Assembly is thus urged to, as a matter of urgency, amend the Constitution and establish a federal and State Police and possibly Local Government Police.

“The current revenue allocation formula allocates more funds to the federal government at the detriment of the states and local government. Secondly, the system discourages striving for an increased Internally Generated Revenue (IGR). This is because most states wait for allocation from federation accounts without much effort at getting an increased level of IGR.

The fiscal system in Nigeria grants minimal fiscal autonomy to the subnational governments in terms of revenue assignment as the major taxes such as company income tax, VAT, custom and excise duties, tax on petroleum products and education tax, are assigned to the federal government.

He maintained that the traditional rulers are closer to the people at the grassroots and can from time-to-time assist the government in ensuring peace, security and social progress.

On gender equality a civil society group “Women in Politics” led it’s President Barrister Ebere Ifendu called for equal gender representation at the National Assembly , she however lauded the efforts of the leadership of the 9th National Assembly in promoting gender sensitivity.

The abolition of the State Independent Electoral Commission  (SIEC) was also clamored for by the Nigerian union of local government employees (NULGE) , Southeast’s union Chairman comrade Nwaigwe Ikedin. Nwaigwe in his address emphasized that  SIEC has been coveted by state governors and has become a tool for selecting stooges as local government Chairman and Councilors thus denying the people freedom to choose the heart leaders at the local government areas.

Other amendments suggested by the group include establishment of local government police, alteration of the revenue allocation formula, Abolition of joint account, funding of primary education from the federation account among others.