As Tinubu Vows Not Apologise

Mrs Arinola Oloko the woman captured in a viral video being verbally assaulted by Senator Tinubu (Lagos Central – APC) during a heated argument at the zonal public hearing of the review of the 1999 Constitution in Lagos has been asked by some yet to be disclosed persons to take cover for a period of time.

Oloko, an educationist with a master’s degree in Public Health who veered into politics in 2018, had an encounter with Mrs Tinubu in which the Lagos Senator called her a “Thug” and asked her security details to kick Arinola out of the venue.

However, according to findings , reasons for being asked to lie low could be to avoid further intimidation or unforseen attack by persons loyal to the Tinubu’s in Lagos State.

Arinola in an interview with Punch Newspapers, disclosed that she was asked by some persons to lie low . While fielding questions Oloko also said that she and her colleagues couldn’t make their presentations at the hearing.

She said “No, myself and my colleagues were not able to make our contributions at the hearing on Wednesday. And I did not bother going the following day (Thursday). People were already calling me not to come. “Some told me to lie low” while some said I should have come and made my presentation, but I have submitted the document containing our presentation.

She confirmed that Tinubu was yet to apologise to her over the assault meted on her and her colleagues.

Meanwhile, Senator Remi Tinubu (Lagos Central – APC) has refused to apologise for calling a woman a thug during a heated argument at the zonal public hearing of the review of the 1999 Constitution.

The altercation between the two happened because the other party was trying to get into the Marriott Hotel venue of the hearing in Lagos, but was met with resistance from the lawmaker who’s the chairperson of the session.

She barred entry because the hall was full, and crowd control measures at the door were starting to break down, interfering with the process during the first day of hearing on Wednesday, May 26, 2021.

The lawmaker’s ‘thug’ comment was considered rude by eyewitnesses, and she has also been widely criticised on social media since a video of the encounter was posted online.

According to reports, the main entrance to the hall was shut after the state governor, Babajide Sanwo-Olu, arrived at the event. The organizers then informed other participants who were on a queue at the entrance to go home as registration for the day had closed. The participants refused, insisting they must be allowed in. While they were standing their ground, lawmakers from Oyo state who were also late for the event came in and were about to be ushered into the venue when the others revolted.

As the shouting match continued near the front door, with those on the queue insisting that they had been unfairly treated, the Oyo lawmakers were led to the backdoor to make their way in. However, some people followed them, preventing them from being allowed into the hall. After some consultation with the personnel at the door, Senator Tinubu showed up at the backdoor to allow the lawmakers in.

As Mrs Tinubu was about to do this, a woman, who complained about being denied entry, decried the partial treatment and voiced out her frustration. It is alleged that Senator Tinubu got insulted by the woman’s advocacy and called her a thug. This led to a shouting match between the woman and Senator Tinubu. 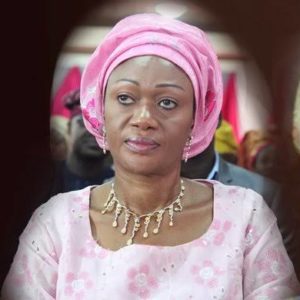 When asked for her reaction after the second day of hearing on Thursday, May 27, Senator Tinubu accused her detractors of politicising the encounter.

She said, “I’m not scared to speak. If we’re trying to build a country for you and you’re playing the politics of calumny, it’s a shame; but I’m dedicated to what I do and will continue to be dedicated.

“At age 60, if I’m scared, I shouldn’t be representing my constituency.”

The lawmaker is no stranger to controversy, and was recently criticised for politicising the issue of insecurity when a fellow member of her party, Senator Smart Adeyemi, voiced his concerns that were considered to paint the APC-led Federal Government in bad light.

Mrs. Remi Tinubu is the wife of All Progressives Congress chieftain, Asiwaju Bola Tinubu rumoured to have interest in contesting to become Nigeria’s President.