Chief Whip of the 9th Senate and Former Governor of Abia State,Senator Orji Uzor Kalu has just been honoured with the prestigious “Honorary Fellowship Award” by the Chartered Institute of Project managers of Nigeria (CIPMN).

The award was presented to the Abia North Senator at an epoch event held on Thursday at the International Conference Centre, Abuja.

According to the Institute’s President/Chairman of the Governing Council of the institute, Dr. Victoria Okoronkwo, the council found Senator Kalu deserving to earn the award, following his  capacity as a legislator to expedite numerous transformation to his constituency as he has done in less than two years as a first time Senator. 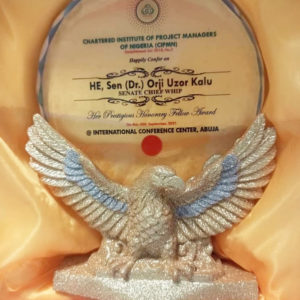 Recall that Senator Orji Kalu has facilitated and attracted over 30 road rehabilitation projects,  50 schools are being renovated, construction of boreholes, including hospitals reconstruction  as captured in the 2020 appropriation.