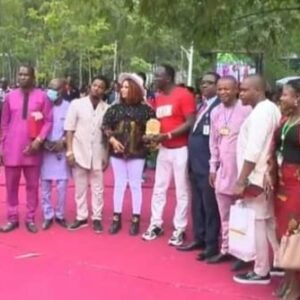 The Senior Pastor and Founder of Christ Mercy Land Deliverance Ministry, CMDM, Effurun near Warri in Delta State, Senior Prophet Jeremiah Omoto Fufeyin, has admonished Christians and non-Christians across the world, not to allow critics distract them from doing good works, saying everyone should put their trust in God and focus on Jesus Christ, to avoid being derailed.

Our Senior Correspondent, reports that the Delta-born self-styled Billionaire Prophet, gave the advice Sunday February 27 at Christ Mercy Land Deliverance Ministry, while expressing joy over the ‘Integrity Man of The Year Award,’ presented to him by the Nigerian Association of Christian Journalists, NACJ.

Senior Prophet Fufeyin, described the award as the Lord’s doing and impressive, disclosing that by October this year, he will be 10 years in the ministry, saying God has made him and the Church grow with speed, impacting lives and sowing back positively to humanity, even as he assured of doing more.

The Man of God, noted that because of the steady growth of Christ Mercy Land Deliverance Ministry, some have resorted to blackmail, saying God will be the judge.

In an interaction with members of NACJ, Prophet Fufeyin, said the Lord has not instructed him to open branches outside Christ Mercy Land Deliverance Ministry, Effurun, which was established in a landmass of over 280 acres, with constant power supply.

During the service, the Billionaire Prophet, empowered two of his members; Erebi Perekpo and Chief Omini Brume, with over seven million naira, to rejuvenate their businesses.

According to the Christian Cleric, one of the beneficiaries, Perekpo, gave him food, when he was a young man and Chief Brume, wrote off the debt he (Prophet Fufeyin) owed him, before he became a Man of God.

The National Protocol Officer of NACJ, Pst. Victor Chibueze, who presented the award to Prophet Fufeyin, on behalf of the National President of NACJ, Dr. Charles Okhai, commended the famous Christian Cleric, “for remaining strong and consistent in doing the work of God, empowering members, serving humanity with hope and preaching God’s word with teachings and power of God”.

He prayed God to sustain the Billionaire Prophet, so as to enable him continue the ministry of positively touching lives across the globe.