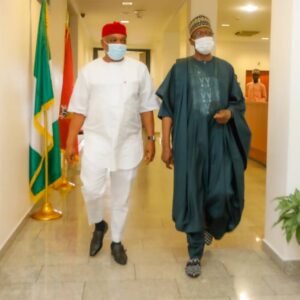 Chief Whip of the Senate and Former Governor of Abia State, Senator Orji Uzor Kalu has Friday, commended the leader of the 9th Senate, Senator Yahaya Abubakar Abdullahi on the occasion of his 71st birthday anniversary.

Kalu in his congratulatory message to the Kebbi North Senator, described him as a leader whose leadership style has impacted positively to the stability and progress of the 9th Senate. Kalu also added that Yahaya has over years rendered a good account of himself in both private and public service by contributing immensely to the human and infrastructural uplifting of his constituents and state at large.

Kalu, while joining the government and people of Kebbi State in celebrating the statesman, stated that leadership services were still needed by humanity particularly his state. He wished the celebrant  longer, blessed life.

“As my dear brother, friend and distinguished colleague, Senator Abdullahi Yahaya marks his 71st birthday anniversary today, I felicitate and extend my heartfelt congratulations to him on this remarkable day.

“We his colleagues are proud of him , he has demonstrated his capabilities as a good leader and has also impacted enormously to the development of his constituency and state at large. I am very optimistic that he will continue to contribute his public service skills to humanity, especially his home state.
“As he clinches this milestone age, I pray to Allah to give him a longer , blessed life  in sound health,” said the Senate Chief Whip while wishing the celebrant a joyous birthday celebration, Kalu stated.