The youth wing of the apex Igbo socio-cultural organization has reacted angrily to the outburst by Barrister Ifeanyi Ejiofor on the recent visit of Senator Orji Uzor Kalu to Mazi Nnamdi Kanu in DSS custody yesterday.

On Monday, Kalu, the Chief Whip of the Senate, paid a visit to the IPOB leader, who is being held in DSS custody as a result of a court order.

Reacting to the outburst by Ejiofor, Ohanaeze Youths Assembly in a statement made available to journalists by its Spokesperson, Philip Ajah warned the IPOB lawyer to stop attacking the Chief Whip of the Senate.

According to the group, the action of Ejiofor was regrettable and embarrassing to Ndigbo and lovers of Nnamdi Kanu.

The group noted that Senator Orji Uzor Kalu being a former Governor and Chief Whip of the Senate, is a respected Igbo son who is working hard to negotiate the release of the detained IPOB leader.

“We cannot but expressed regret in the action of Barrister Ifeanyi Ejiofor who is now acting like a President of lost group without direction. Obviously, his action was to paint an illustrious Igbo son bad in the eyes of the masses for reasons best known to him.

“It is obvious Mr. Ejiofor is trying to sabotage the urgent release of Mazi Nnamdi Kanu. There is no crime for a high ranking government official like Senator Kalu to visit his brother in DSS custody. Kalu should be commended for courage, boldness and solidarity to the IPOB leader. For him to have summoned the courage to visit Mazi Nnamdi Kanu is very commendable.

“Barrister Ifeanyi Ejiofor is not happy that some Igbo leaders are working so hard for the release of Mazi Nnamdi Kanu. His intention was to cause disaffection between Kanu’s supporters and these leaders. We are warning him to stop sabotaging his release. He should desist from his ugly antics of using Nnamdi Kanu’s name and IPOB to gain cheap popularity,” the group said. 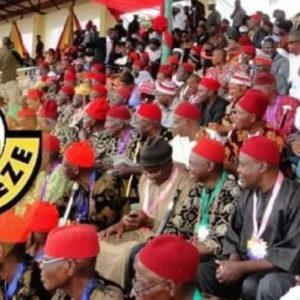