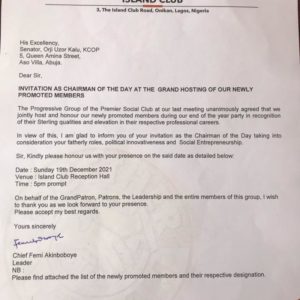 Former Governor of Abia State and Chief Whip of the Senate, Dr. Orji Kalu has been nominated to serve as Chairman of the day at the grand hosting of newly promoted members of the progressive club of the Island club at an event scheduled to hold at the reception hall of Island club on December 19.
According to the organizers of the event, Kalu’s choice as chairman of the occasion is borne out of the the political innovativeness, social entrepreneurhip and detrabilized mindset of the former Governor.
In a letter to Kalu signed by Chief Femi Akinboboye, the group commended the Senate Chief Whip, who is a longtime member of Island club for his outstanding leadership qualities.
The letter reads in part, ” the Progressive Group of the Premier Social Club at our last meeting unanimously agreed that we jointly host and honour our newly promoted members during our end of year party in recognition of their sterling qualities and elevation in their respective professional careers.
“I am glad to inform you of your invitation as the Chairman of the Day taken into consideration of your fatherly roles, political innovativeness and social entrepreneurship.
” On behalf of the grand patron, patrons, the Leadership and the entire members of this group, we look forward to your esteemed presence at the event”.
Kalu has consistently taken part in various activities of the well respected club.