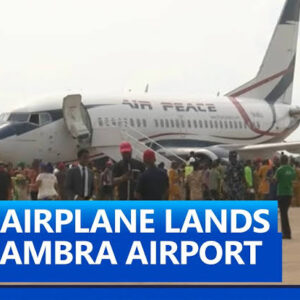 1. It was built in a record time of 15 months by the Willie Obiano led Anambra State Government. The government did not borrow a kobo nor did it seek any form of financial aid to build the airport.

3. A test flight was performed on April 30, 2021. The first plane that landed in the airport was a plane from the AIR PEACE fleet belonging to Chief Allen Onyema, a worthy son of Anambra State.

4. The airport is expected to create about 1000 direct and indirect jobs.

5. The Anambra International Cargo and Passenger airport is a legacy of the Willie Obiano led APGA administration. A promise that was fulfilled after three decades.

6. SIZE: The Anambra International cargo and passenger airport is a Category ( CAT ) 4F airport. This means that an A380 aircraft or an Airbus can land comfortably in the airport.

8. RUNWAY LIGHTING: The runway is equipped with CAT 2 lighting system. This implies that a plane can be guided by the light to land safely even in adverse weather conditions.

9. SATELLITE LANDING SYSTEM: The airport is equipped with a satellite landing system (SLS). This provides for satellite assisted landing of aircraft should the runway lights fail for any reason.
The airport also has Instrument landing system, ILS, which ensures that aircrafts are vertically and horizontally aligned with the runway while landing.

11. THE APRON: The airport apron measures 300 metres by 200 metres.
– It can accommodate 8 Boeing 747 aircraft at the same time.
– It is built on a rigid pavement of concrete with a thickness measuring 560mm and reinforced top and bottom with concrete measuring 16mm in thickness.
– The Apron is built to repel water. So even when it rains, water runs off the surface easily.

13. THE TERMINAL BUILDING: The terminal building is designed to accommodate 400 passengers. Other features include:
– A departure and arrival lounge
– There are 36 shops in the building
– There are three lifts and three escalators
– Two Avio bridges each equipped with dual boarding passages. This means that four aircraft can take passengers at the same time.

14. RESCUE AND FIRE FIGHTING SERVICES: The airport is CAT 9 airport
– It has three fire tenders (fire engines) that can shoot water up to the height of the control tower.
– The tenders can be controlled by the driver alone.
– The airport is also equipped with 20 hydrants.

16. POWER: A 33 KVA line drawn from Agụ Awka to the airport guarantees an 18-hour power supply.
– Two units of 500KVA generators serve as a backup to provide power always.

17. CAR PARK: The car park is aphalted and properly marked. It is designed to accommodate about 750 vehicles.

18. AIRPORT ROAD: The airport road has two access roads. The first and major airport road measures about 5.7km and connects the Onitsha-Enugu expressway to the airport. It is a dual carriageway road fitted with a bridge on either side of the carriageway. It has drainages on both sides. The road is completed, clearly marked and fitted with streetlights.

The second airport road measures about 4km and connects the airport to the Nteje-Umueri-Aguleri road.

The driveways within the airport are all asphalted and marked.

Ndị Anambra, behold your airport. Built, equipped and launched by Gov Willie Mmaduaburochukwu Obiano, Akpọkuedike has done it. APGA did it. What seemed a fairy tale since the creation of Anambra state 30 years ago is finally a reality.