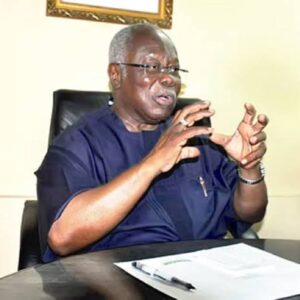 Former Deputy National Chairman of the Peoples Democratic Party, Chief Olabode George, has said that former Lagos State Governor and National Leader of the All Progressives Congress, Asiwaju Bola Tinubu, is not fit to run for the presidency, alleging that he has no school certificates to tender to Nigerians. Speaking with Saturday Telegraph against the backdrop of a statement credited to Tinubu that he won’t reject overtures from Nigerians that he should contest for the Presidency in 2023, George said those urging the APC leader will be shown the ‘true identity of Tinubu.’ Tinubu, last Tuesday, after a meeting with members of the Northern Alliance Committee in Abuja, said though political consultations were ongoing, he will not reject calls to contest for the Presidency in 2023.

The APC leader said: “I’m not going to turn them down but I am still consulting, particularly brainstorming with my friends and I will find a date to come out openly and tell Nigerians.” George alleged that some of the antecedents and records of the former governor must be interrogated including his academics claim, adding that those asking him to run will be confronted with ‘facts on his personality.’ He said, “Since he said some people are pushing him, let him go and run. We are here to present his (Tinubu) true identity to Nigerians. His educational claims are subject of controversy and we will show those urging him on to ask for his certificates. “Bola Tinubu has nothing to offer this country. Do you think Lagos is better off? We live here. Look at the state. No drains, nothing. What is going on? This is my state.

Look at what they have turned our youths into? “With all the challenges we have on our hands, Nigeria needs a God-fearing, committed, dedicated, moral, selfless and clear-headed human being to be the President, someone like Tinubu lacks such character. He cannot wear that cap.”