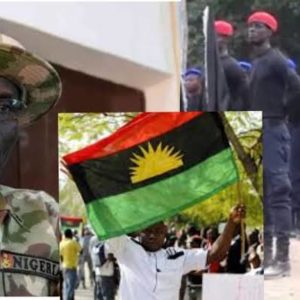 Setting up of camps and grave yards in different locations. Burying of human beings alive, beheading, maiming, roasting, and eating of human flesh.

We saw the future early enough, we knew they never meant well for us, they disguised as freedom fighters, cooked up unbelievable propaganda. we were shouting on top of our voices.

Some of my friends met me physically, told me to stop writing about these guys. However, keeping quiet while these guys continue killing our vibrant Igbo youths will be a sin against humanity. We can’t keep quiet in the face of tyranny and forceful introduction of Igbo youths to vagabonds who don’t have conscience.

Conspiring against your own people, cutting off their penis, making them pass through excruciating pain, just because they said the proscribed people should do the right or spoke against evil and their heinous crimes and atrocities.

Immediately the Fendi marketer got rearrested, funds stopped coming from their members in diaspora, they split into two factions. The Fendi marketer’s family, and those who are loyal to Simon Ekpa.

This pushed them into cannibalism, eating of human flesh for survival, kidnapping, stealing of biscuits, PMS, and snatching of cars. Most of them were taken to Ibin Ukpabi to take oath of secrecy. Those who later found out that what they were hoodwinked into believing, wasn’t what they saw at the camps, however, by then it was already too late for them to make a u-turn.

Those who dared runaway were captured and buried alive. Their families and friends were rendered incommunicado, nobody ever heard about them again.

News also has it that, one of their ring or camp leaders, who made this open confession, said they were the ones who opened fire first against the Nigerian military, that the Nigerian Army was civil and Professional in their engagement, the soldiers said the federal government gave them a matching order, that no ill mannered, bankrolled protest should take place at Onitsha, that they came for peace.

These boys who trade on “mkpuru mmiri” opened fire on them, saying they must protest, before they could say jack robbison, it was already a free for all.

I have one of my friends who is an overzealous supporter of the Fendi marketer, to the extent that he said if his mother gives him instruction, that he will jettison the mother’s instructions, and do the biddings of the Fendi marketer first. This is to tell you the extent to which these boys have been brainwashed, that, they don’t have a normal thinking of their own again. They can no longer think for themselves.

These boys are tired about life, most of them are ex-convict who escaped from prison, they have no formal education, some of them their family members don’t know where they’re currently. Most of them have nothing to lose, hence, the reason they were easily captured by the white wash propaganda of the Fendi marketer, that never existed.

The #Fendi marketer was able to buy deeply into their mind share because, these boys were seriously looking for a route, to escape from the low life, nature has brought them to be. So, the Fendi marketer gave them a false hope, a fake picture of what it will look like if they achieved their unfounded aim that will never come.

Before they could find out, about thousands of them have already taken oath of secrecy, they had no route of escape again, that’s why you hear them say, it’s “Biafra” or nothing, because they already had nothing to lose in life. Their lives were already wasted, so, for them, it’s either getting the fake promises “onye ndu” made to them, or they die trying.

This was the exact scenario of what transpired under the pipeline for years, people weren’t aware.

What baffles me is the worrisome sitting on the couch of some ill informed people who actually know the truth, yet, they choose to play the ostrich.

Chukwuemeka Odumegwu Ojukwu of blessed memory, who went to Oxford University graduated in flying colors, speaks queen’s English, came back to Nigeria , despite his father’s wealth then, like #Dangote of today, jettisoned his father’s wealth, joined the Nigerian military, rose to become a Major General in the army, never killed anybody unlawfully, never forced people to take oath of secrecy or they die, unlike the Fendi marketer who was chased out of University Of Nigeria Nsukka , he ran to #UK , was also rusticated from UK university, never graduated, never has he worked for anybody or set up any business in his life. He never married his wife properly, got her impregnated and viola , they became couples wrongly.

He has always been a rebellious son. He was a total terror and bully in Government College Umuahia . He was in Cozen’s house then. News has it that, he molested his juniors and fellow students terribly in GCU.

We fervently wish that our people will regain the boldness to remove this cankerworm of cannibals, disguised as freedom fighters from our society.

We must come together as a people to reject these set of human eaters , who maim, molest, rape and kill our vibrant young men and women.