A day after he was bestowed with the prestigious Senate award for constituency development in recognition of his impressive representation and expedition of massive constituency projects in his Abia North, the Chief Whip of the Senate, Senator Orji Uzor Kalu has been presented with his award plaque by the organisers of the award.

Receiving the award organisers  the Senate Press Corps , at his National Assembly Complex office on Tuesday, Kalu appreciated the Corps for the recognition, the former Governor also reinstated his commitment at supporting Media practitioners in the country.

Present with his other executives , Chairman of the Press Corps, Mr. James Itodo who handed over the plaque to SenatorOrji ,had earlier stated that the decision to honour kalu was an unanimous one as a result of his giant strides recorded in his constituency in the areas of projects within a year and half of his election. 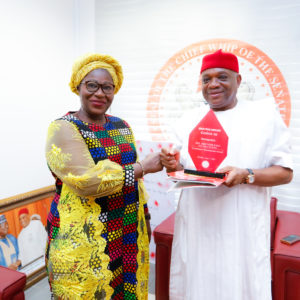 Itodo also commended the Chief Whip’ s motions on the resuscitation of Southeast’s Power and Transportion infrastructures at the Red Chambers which received the Federal Government’s prompt attention.

Both parties ended their addresses with a brief photograph session. 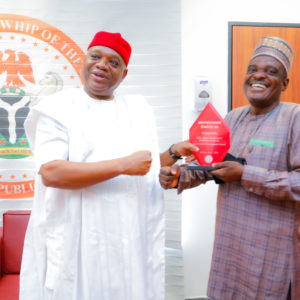 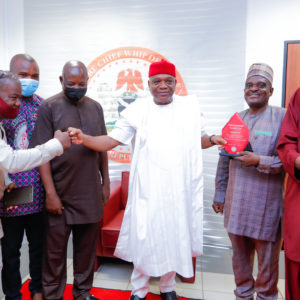 According to Itodo, Senator Kalu’s execution of projects in  all the local government areas in Abia North -Arochukwu, Bende, Isuikwuato, Ohafia and Umenneochi are worthy of emulation and deserves commendation. 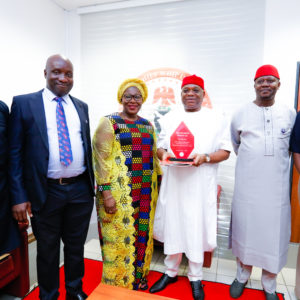 Others who received awards in various categories at the event include President of the Senate , Ahmed Lawan, Governor Yahaya Bello, Imo State Governor, Hope Uzodinma, Governor of Bayelsa State , Douye Diri ,Governor of Delta State, Governor Ifeanyi Okowa and others.