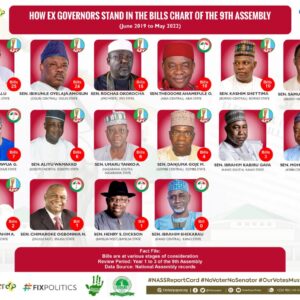 With twenty five legislative bills standing in his name Senator Orji Uzor Kalu A first time Senator from Abia State who made his pioneer entry to the Senate in 2019 has been rated highest in Bill sponsorship amongst other Senators from the South Eastern state and his peers who are Former Governors at the 9th Senate.

As reported on Tuesday by OrderPaper.ng Nigeria’s verified parliamentary multimedia platform, Kalu a new comer Senator has sponsored more bills at the Nation’s Apex parliament than his Abia State counterparts. 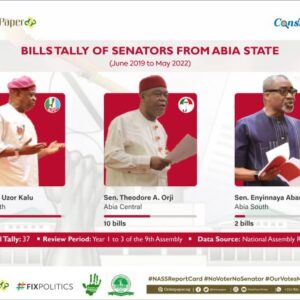 Using the 2019 – 2022 cumulative legislative tenure of the 9th Senate and Kalu’s bills, the Senate Chief Whip exceeded his colleagues by 67% compared with Senators ; Theodore Orji (10 Bills) and Enyinnaya Abaribe (2 Bills) who have spent 8 and 12 years respectively at the Red Chambers.

Asides discharging his constitutional elected responsibility with his bill driving streak the 62-year-old lawmaker representing Abia-North has also bagged prestigious awards from notable organisations in recognition of his infrastructural and empowerment drive for his constituents which has been described as superlative coming from a first time Senator.

Amongst the former Governors , A total of 16 were elected to the 9th Assembly as Senators in 2019, constituting 17.44% of the total number of lawmakers in the chamber.

According to a review of performance in the Third Year( 2019-2022) ; Orji Kalu sponsored the highest number of bills with 25 to his credit, closely followed by Ogun Senator Ibikunle Amosun who fronted 24 Bills.

Orji kalu a Chieftain of the ruling All Progressive’s Congress (APC) was elected to the Senate in 2019 in the National Assembly.

In the report the media organisation x-rayed the legislative performance of the twelve Abia lawmakers in the National Assembly. Order Paper Nigeria highlighted the scorecard of Senators and members of the House of Representatives from the state. The piece was focused on their performance in the area of Bill Sponsorship over the last three years (2019 -2022).

It is however important to note that Senator Abdullahi Adamu, officially resigned from the Senate in April 2022 following his election as the new national chairman of Nigeria’s ruling party, APC.