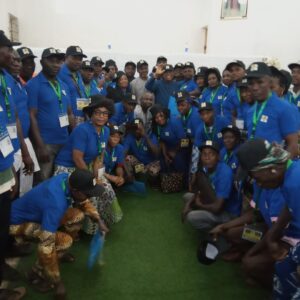 By Ikechukwu Odu
NSUKKA—-The Forestry Research Institute of Nigeria, FRIN, on Wednesday, trained and empowered at least 240 farmers on snail and fish farming to guarantee food security in Nigeria.

The Institute explained that the programme was targeted at school leavers and retirees.

While taking the participants on snail farming at the Princess Alexandra Auditorium, University of Nigeria, Nsukka, UNN, a personnel of FRIN, at Ishiagu, Ebonyi State, Dr. Musliu Mustapha, bemoaned the drastic reduction of snail population due to harmful human practices such as bush burning and application of inorganic fertilizers on farms.

Dr. Mustapha while explaining different techniques of snail farming, added that snail remains a good source of amino acids and non-conventional proteins, adding that its consumption is medicinal, especially, for people with heart disease, hypertension and diabetes.

Also, the leader of FRIN team in Ibadan, Oyo State, Dr. Shola Oyewele, explained that the Institute evaluates the progress of beneficiaries with a view to rendering more assistance, adding that the programme has helped to produce many farmers across the geo-political zones in the country.

“We have been organising this programme across differnt geo-political zones across the country and we have discovered that it has been yielding good results. We receive feedback from many of our participants and they always told us how they are doing fine in some of the vocations introduced to them.

“The training covers snail farming, fish farming. The participants have been introduced to different techniques of establishing their farms and all the management activities involved. The third one is seedling production and nursery management. All these programmes would translate to improved livelihood if the participants embark on them with dedication,” he explained.

While addressing newsmen, the facilitator of the programme, Ambassador Ejike Eze, explained that the present All Progressives Congress, APC, government has shared more social empowerment programmes to Nigerians than any other government in the past.

Ambassador Eze, who is APC’s Senatorial candidate for Enugu North Senatorial District of Enugu State, regretted that people of the District have not benefited from such Federal Government programmes in the past due to poor representation of the people at the National Assembly, assuring the participants that if elected in 2023, the people would enjoy human-faced representation.

“I can tell you that APC is a party that has a lot of interests on the wellbeing of Nigerians. It has the greatest number of poverty alleviation programmes. I am surprised that there is not enough evidence to show that my people benefited from these social intervention programmes from the Federal Government. If I am elected as the Senator of this District in 2023, I will ensure that my people get fair share of these programmes from the government. There shall be so many of these empowerments if I am elected in 2023,” he said.

Some of the participants, including Nnenna Ezike, and Hillary Ugwuja, expressed their appreciation to the facilitator, Ambassador Eze, assuring that they would repay his good gesture at the polls in 2023.
_30_
Photo:The senatorial candidate of APC in Enugu North Senatorial District of Enugu State, Ejike Eze, with resource persons and and beneficiaries of trainning programme of FRIN in Nsukka, Enugu State on Wednesday.