The contractor handling the construction of the 2-km Akanu-Abia Ohafia Road in Ohafia Local Government Area of Abia State, officially returned to site to resume work on the Akanu axis of the project.

This is coming days after Senator Kalu visited Ania ward comprising of Akanu, Abia, Ndi Uduma Awoke, Isiugwu and Amankwu communities during his ward-to-ward tour across the senatorial district. 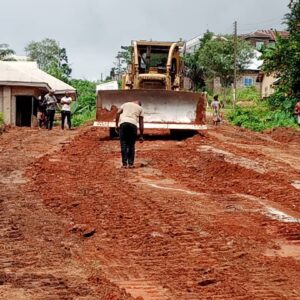 Speaking with reporters after inspecting the site, an aide to Kalu who did not want to be named said contractors had been mobilized to all ongoing road projects across the senatorial district

Meanwhile, the people of Abia-Ohafia have lauded Senate Chief Whip Dr Orji Uzor Kalu (APC – Abia North) )for the reconstruction of the road that leads to their community and the provision of electricity.

They said the former governor of the state was the first politician to perform this feat for them.

The president general of the community, Chief Peter Eke Onoh, who gave the commendation in a chat with Newsmen, expressed gratitude for the senator’s visit to Ania ward during his tour of wards, praising him for the developmental projects he has attracted and is currently embarking on.

“He has built the road to a certain stage. The third phase is what we are pleading with him to complete. Without him, we wouldn’t have had a road, without him, we don’t even see light”.

Just In: We'll pay you back in your own coin, Abia North youths tackle Ohuabunwa for working with Wike to shortchange S/East