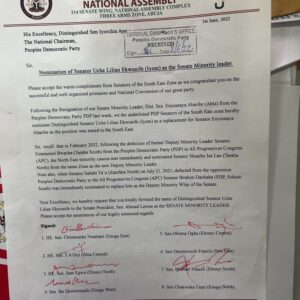 This was contained in a letter to the the PDP National Chairman, Iyorcha Ayu by the South East PDP Senate Caucus

The letter read in part, “ Following the resignation of our senate minority leader, Senator Enyinnnaya Abaribe (Abia) from the Peoples Democratic Party PDP last week, we the under listed PDP senators of the South East zone hereby nominate Distinguished Senator Uche Lilian Ekwunife (Iyom) as a replacement for Senator Enyinnaya Abaribe as the position was zoned to the South East.

“Your Excellency, we humbly request that you kindly forward the name of Distinguished Senator Uche Lilian Ekwunife to the Senate President, Senator Ahmad Lawan as the Senate Minority Leader. “ the letter read