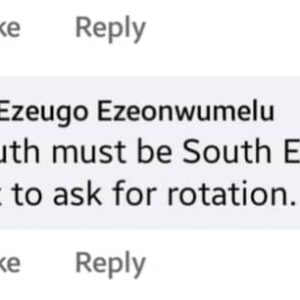 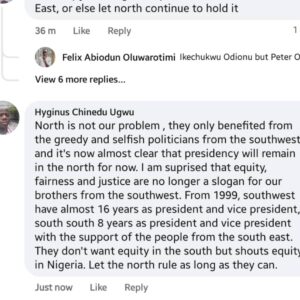 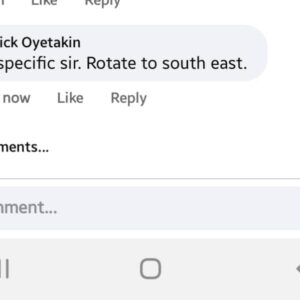 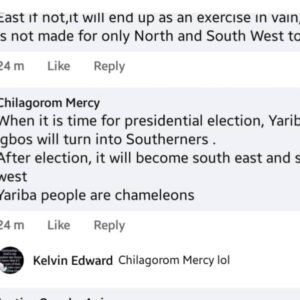 Another attempt by Gov Akeredolu of Ondo State to make a case for Southern Presidency whilst evading the SouthEast region has been vehemently condemned by concerned Nigerians.

Taking to their social media platforms the online users described the Governor as being  insincere and hypocritical in his statements, according to them Akeredolu deliberately avoided mentioning the South East while making a case for power shift to the Southern region of the country with regards to the 2023 Presidential race.

Baring their minds on a statement credited to the Governor where he asked the All Progressive’s Congress party to retain power by rotating the presidency to the South, the online users accused Akeredolu of being biased saying if he is genuine he should have specifically advocated for power shift to the South East since the region has never been given the opportunity to produce since the advent of the fourth republic.

In a short message via his personal Facebook page on Thursday, the Governor re-echoed the position of his colleagues in the Southern Nigeria Governors’ Forum, that power should be rotated to the South.

Leaving behind the Southeast, Akeredolu added that it is the turn of the South to produce the next President and the APC leadership should have no difficulty in making pronouncements on such an important issue.

The statement has since been trailed with a magnitude of condemnation, reacting to the statement, the vast majority of Nigerians claimed that the Governor is cunningly advocating for Presidential aspirants from the South-West zone, a region which had produced Presidency for 16 years.

Accusing the Governor of “dishonesty” his statement they however, maintained if the South South and South West regions were not willing to back the Presidency to be zoned to the South-east region, the North should continue in power beyond 2023.

In a Facebook thread on Channels TV page , Oyetakin Patrick urged the Governor to be specific in his claim for power shift to the Southern region by mentioning the South-East.

He wrote; ” Be specific sir ! Rotate to South East”.

Ezeorji Nnaemeka on his part queried ;”Why people are dishonest like this? Rotate power to which part of the South? Whoever is agitating for power rotation to south without being specific to the area of the south is simply treacherous & perfidious. We have said it many times here, if the rotation is not about coming to southeast which is the only region in the south that has not produced the president, then let it be in the north”.

Hyginus Chinedu in his comment identified the greediness and selfishness of South Western politicians as the reason power will elude the South in 2023 he wrote; ” North is not our problem , they only benefited from the greedy and selfish politicians from the southwest and it’s now almost clear that presidency will remain in the north for now. I am surprised that equity, fairness and justice are no longer a slogan for our brothers from the southwest. From 1999, southwest had almost 16 years as president and vice president, south south 8 years as president and vice president with the support of the people from the south east. They don’t want equity in the south but shouts equity in Nigeria. Let the north rule as long as they can”.

Ezeorji Nnaemeka described Akeredolu’s statement as being dishonest for avoiding the South-East, he however supported the retention of power in the North if the South-East does not produce the President.
He wrote ; “Why people are dishonest like this? Rotate power to which part of South? Anyone who is agitating for power rotation to south without being specific to the area of the south is simply treacherous & perfidious. We have said it many times here, if the rotation is not about coming to southeast which is the only region in the south that had not produced a president, then let it be in the north”.

Some other comments as captured read ;

Innocent Ucheji ; “Where in the South? If it’s not South East, let the North have it”.

Raphael Ikeokwu Uche ; “To South Were? If not southeast let it be open to all regions.”

Henry Chigozie; “When you say South be specific cos I know your bias mind is telling you it’s South East”.

Temple Johnwyte; “Hypocrisy, when asked about Igbo presidency, you said is not the constitution, but, you want the north to allow the power to come to the south, greedy…”

Chilagorom Mercy ; “When it is time for presidential election, Yorubas and igbos will turn into Southerners .After election, it will become south east and south west , Yoruba people are chameleons”. 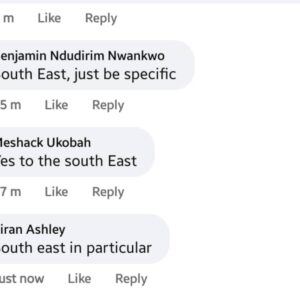 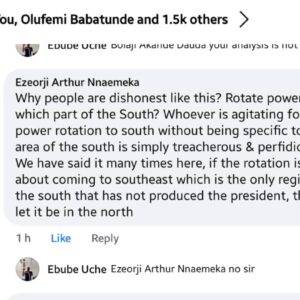 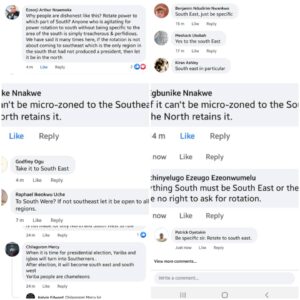