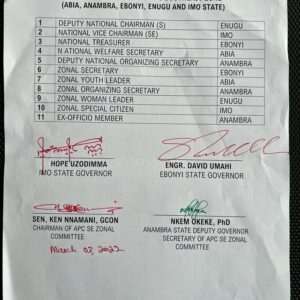 The Group led by Comrade Paschal Candle said the purported Sharing of offices for the five States of South East cannot stand for there is no equity, fairness and Justice in it. The Group maintained that at no point did Leaders and Stakeholders of the Party in South-East Zone met and decided who gets what from the positions zoned to the Zone. 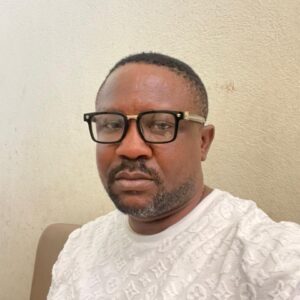 Addressing a news conference on Thursday in Enugu, the National Cordinator of the forum, Comrade Paschal Candle, expressed displeasure at the turn of events in the APC in recent times.

“In the wake of the thundering displeasure over the recent overbearing influence of Senator Hope Uzodimma and New Entrants in the Party by party members, we, the South East APC Young Progressives Forum, have taken up the responsibility of speaking to the issues that currently bedevil our party, as it would appear that the expected voices of our elders, who should provide a firm direction in times of conflict have grown weary.

“APC is renowned as a party of the masses and as such, the new trend where our esteemed Governors are seen to take over the affairs of party organs, party administration and all-party decision-making processes, is rooted in autocracy and does not portray an example of the APC of our dreams and of youthful Nigerians.

The Group frowned at the attitude of Governor Hope Uzodimma, Senator Ken Nnamani and Dr Nkem Okeke who sat at the comfort of their homes and allocated positions to their various States.

For avoidance of doubt, at no point did Founding Fathers, Leaders and Stakeholders from the Zone met to agree on this sharing of Offices among States.

In South East, we have respectable Leaders and stakeholders, who have been the founding Fathers of the Party. Who have laboured to put APC where it is today. Where are the likes of Chief Ogbonnaya Onu, Owelle Rochas Okorocha, Dr Chris Ngige, Chief Dr George Moghalu, Senator Ifeanyi Ararume, Chief Osita Izunaso, Senator Orji Uzor Kalu, Rt Hon Nkiru Onyeocha as Principal Officers at the National Assembly and Many others.

We are calling on all the Potential Aspirants from South East to go out there and purchase their forms for any of the Positions zoned to South East. It is within their constitutional right as citizens of this great Country and Members of our Great Party to do so.

We reject the Micro-zoning list being paraded and we state again that at No point did Leaders and Stakeholders of our Party agree on any Micro-Zoning. The Signatories cannot determine the fate of APC Members from South East, the Statement concluded.