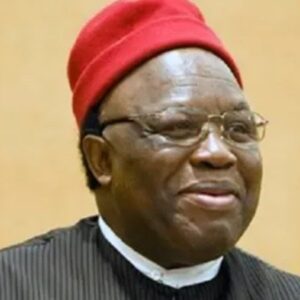 Former Governor of Abia State and Chief Whip of the Senate, Dr. Orji Kalu has condemned the attack on the Awo- Omanma country home of President General of Ohaneze Ndigbo, Professor George Obiozor.
It was reported that the home of the statesman was set ablaze by unknown gunmen in the early hours of Saturday.
Describing the act as evil, cruel and wicked, Kalu called on appropriate authorities to investigate the ugly incident in a bid to bring perpetrators to book.
The former Governor stressed that the statesman is a peace loving Nigerian, who has consistently sustained his good character in view of his personal attributes and commitment to nation building.
Kalu faulted the attackers for what he described as uncivilized, adding that violence and social vices are detrimental to the growth and progress of the society.
In a statement, the Senate Chief Whip called on Ndigbo and Nigerians in general to embrace peace and unity for the sake of nation building.
He said, ” The reported attack on the country home of the President General of the apex Igbo body, Ohaneze Ndigbo, Prof. George Obiozor is unnecessary, wicked and crude.
“There should be law and order in a democratic set up and as such the ugly incident must be properly investigated so as to bring the perpetrators to book.
“The President General is highly respected beyond the shores of Nigeria and he doesn’t deserve to be maltreated.
“The perpetrators of the evil act must face the wrath of the law.
“I strongly and categorically condemn the evil act”.
Kalu while urging the President General to be calm, admonished security agencies to live up to expectations by exposing the perpetrators of the incident.