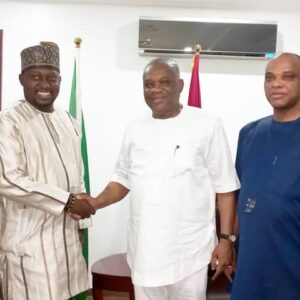 AHEAD of the much awaited National convention of the ruling All Progressives Congress, APC, slated for March 26, Chief Whip of the Senate, Senator Orji Kalu has given his backing to the candidature of Dayo Israel to emerge as the National Youth Leader of the APC.

The frontline Aspirant for the National Youth Leadership position received Orji Kalu’s endorsement when he visited the former governor at his private residence in Aso-Villa, Abuja on Thursday evening.

Dayo and his entourage arrived at Kalu’s residence at about 7:47pm and was accompanied by other prominent leaders of various youth leadership groups in the party which included; SA to Kwara state Governor on New Media , Olayinka M Solace,  Pigo Hedliger, Hon Mathias. Also in the delegation was the Abia North Zonal Youth Leader, Comrade Okoroafor Kingsley Nduoma who presented the envoy to Senator Kalu.

During the course of his address to the Chief Whip of the Senate  , Dayo, an Executive Permanent Board Member of the Lagos State Universal Basic Education Board, eulogised the Abia North Senator and commended his leadership strides in the South-East and the Nation.

Dayo further disclosed his admiration for Orji Kalu recalling his achievements during his tenure as Governor and currently as Lawmaker in the Ninth Senate , describing him as the “Lion of the Southeast “.

On his ambition Dayo intimated Kalu on his plans and objectives of eventually being elected into office, he outlined his experiences and achievements in the leadership spheres. According to him, aside from being a member of the British Council Global Changemakers Network and Alumnus of the US State Department International Visitors Leadership Program, Dayo also told Kalu about his contributions to the party’s activities prior to the convention exercise.

Giving the Senate Chief Whip an update on his campaign endeavours , the Nat’l Youth Leader hopeful disclosed that he had received the endorsement of his State Governor,  Babajide Sanwo-Olu and other notable leaders from the Southwest to be the candidate for the Youth Leadership position from the region.

He said ” Your excellency sir , as you would have already been aware the position of the National Youth Leader is one of the positions micro zoned to the South West. I am glad to tell you that I have received the backing of my state Governor Babajide Sanwolu and I have also gone ahead to consult other leaders from our region and beyond, which is one of the reasons we are here to seek your support”.

” You’re a leader of not just the South-East but across the nation and that is why I and my team are here to seek your support”.

In his response; Orji Kalu appreciated Dayo and his team for the visit, on his ambition Kalu assured Israel of his support, stating that he had no reason to deny him of his endorsement.

”  You are from Lagos , and if I tell you how deep rooted the relationship I have with Bola Tinubu you will be amazed so there’s no reason we shouldn’t support you , because you are one of our own. 43% of voting strength in Lagos are made of Igbos il talking of registered voters. We have Sanwo-Olu’s back and we shall support him and we shall also support you too. If you need any help and you cannot reach me directly you can meet any of my Aides, you have my blessings. You are just seeking my assistance for the South-East when you should be talking about Northern Nigeria where they will listen to me, Kalu said.