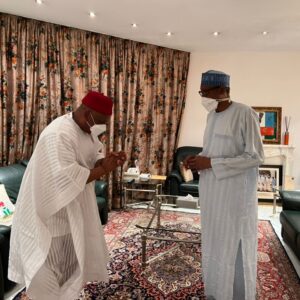 Announcing the visit on his verified Facebook page,  kalu wrote, ” Tonight, I paid President Muhammadu Buhari a visit to discuss major national issues and I am very satisfied with our discussion.  I left him at 10pm and was in good health . We look forward to a better Nigeria.”

Today’s visit to the President comes hours after the Senate Chief Whip was greeted  to rousing cheers from supporters at the National Assembly where he arrived to resume his legislative duties following the end of Christmas and New Year break embarked on by the Senate on January 18, 2021.

Kalu who recently declared his ambition to contest the 2023 All Progressives Congress Presidential ticket was welcomed to choruses of “You are our Next President” by staff, visitors and other passersby from the entrance to the hallway of the Red Chambers.

Recall that the former Governor and 2007 Presidential candidate had last week in a special interview declared his intention to succeed President Buhari in 2023, in his address Orji Kalu stressed his belief that the South-East is ripe for the Presidency and that it should be the turn of the region to produce the next President.

Prior to his declaration Kalu has received the endorsements of notable groups around the country citing his capability as well as fairness and justice to the Southeast region.

Breaking: Tinubu Fingered In An Illicit Drug Business And Money Laundry By US Government.