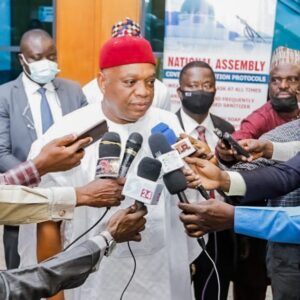 Chief Whip of the Senate and Former Governor of Abia State, Senator Orji Uzor Kalu has declared ahead of the 2023 general elections that though he is ready for the campaigns and capable to lead the country he is not desperate to become President. 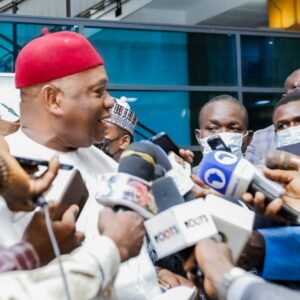 Fielding questions from journalists at the National Assembly on Wednesday, a day after he visited President Buhari at the Presidential villa on Tuesday night, the Senate Chief Whip emphasised that the Presidential contest will be the collective decision of Nigerians and the zoning arrangement of the Political parties particularly his party the ruling All Progressive’s Congress. 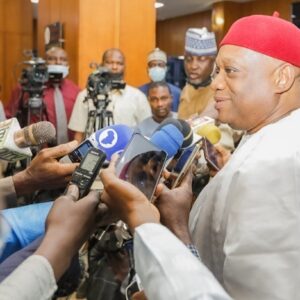 The former Governor however maintained that the Southeast region was overdue to Produce the next President of the country, he added that there were only two zones yet to produce the President which were the Southeast and Northeast geo Political zones.

Kalu stressed that his visit to President Buhari was a usual one adding that their relationship has spanned for years before he became President. He disclosed that their discussions were centred national issues with regards to security, electoral laws and the welfare of the country. 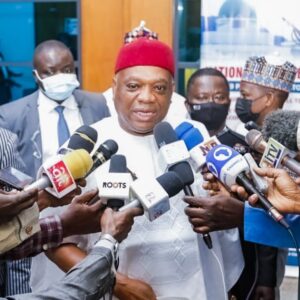 He said “This is not the first time I’m going to see the President. People usually go in the afternoon but I went in the night to avoid the press.
“I go there regularly.It’s a family affair and I went there to discuss national issues with regards to security, well being of our country and the issue of the electoral law and the discussion was very fruitful.

When asked if he informed the President of his Presidential Ambition.

“It’s overdue for an Igboman to become a Nigerian President, I believe the Southeast should produce the next President and it’s going to happen ”.

In a further response Kalu slammed other Presidential aspirants in his All Progressives Congress (APC) who had gone to inform President Muhammadu Buhari about their intentions saying they were not serious people.

He said those already pushing are not being fair to the feelings of Nigerians.

“They are not serious. A serious minded person will like to be fair to Nigeria, to be fair to the society and be fair to the atmosphere because this party is not owned by me or by you the press people. It is only APC people that can decide where the party ticket will go to,If they zone it to the Southeast I have all it takes to make a good President”.

The Abia North Senator said that he would pursue his Presidential Ambition with other geopolitical zones of the Nation, while stressing that he will commence Nationwide consultation at the right time.

Responding to questions on the APC’s forthcoming February 26th convention Kalu expressed optimism that the exercise will be raucous free saying that the outcome will make Nigerians proud.

Recall that Kalu’s declaration came barely 24 hours after former Governor of Lagos State and  National Leader of APC, Bola Ahmed Tinubu met with President Buhari to express his interest in the top job. The Governor of Ebonyi State, Dave Umahi had also met with Buhari to declare his ambition to take over from him in 2023.