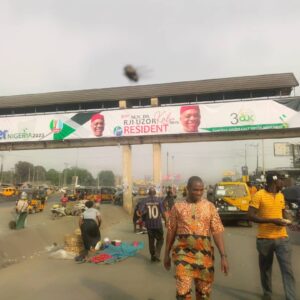 A large presidential campaign billboard bearing the name and picture of the Chief Whip of the Senate, Senator Orji Uzor Kalu has surfaced in the commercial city of Onitsha, Anambra state and other states of the South East.

Kalu, a member of the ruling All Progressives Congress (APC), is currently the Senator representing Abia North Senatorial District.

Our correspondent observed that the campaign banner which was attached to a bridge in a strategic location at the Uga Junction Bridge, had a picture of Kalu.

Others were located at Approach Intra Onitsha and Asaba expressway.

The campaign banner had the inscription, “For a better Nigeria, support Orji Uzor Kalu for President.”

The All Progressives Congress logo was inscribed on the large banner, it also had the name of a group, ‘South East Movement Youth Movement’ as the sponsor.