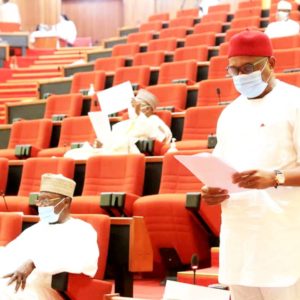 Evangelist Kes Akpama of the Lordside Assembly, has said that Chief Whip of the Senate, Senator Orji Uzor Kalu, is destined to succeed President Muhammadu Buhari in 2023.

The cleric made this known on Wednesday during the opening of its end of the year retreat with the theme titled: “God’s Anointed Servant”.

Speaking during the retreat, Akpama, the convener of the retreat, said the exceptional role played by Senator Orji Kalu in stopping the third term agenda was yet to appreciated by Nigerians, noting that it is time for a Nigerian President of South East extraction with the former Abia state governor as God’s choice to take the top leadership position of the country.

Akpama noted that the choice of Kalu aligns with the comment of Ibrahim Babangida, former head of state, that the next president should be in his 60s.

“What we need now is a President with a forgiving spirit. I am happy to have read an article where Senator Orji Uzor Kalu said he learnt a lot while in detention. I am happy he said he has forgiving all those that betrayed him. It is good to learn from one’s mistakes. God is taking him to places. I see him succeeding President Muhammadu Buhari in 2023.

“What God is looking for is someone that’ll be president of all Nigerians. Senator Kalu despite being an Igbo man has vast contacts across the nation. He is loved across board and he has the leadership qualities that’s needed to propel Nigeria to greater heights. Dr. Kalu has demonstrated practical leadership in the Nigerian Senate and Nigerians have learnt from his personal experiences that the best way to excel as a leader anywhere in the world, is to work for the people, that is why 20 years after exiting office as the Governor of Abia state is the still a positive reference point to all.

“He is like the Biblical David. Even though he is Igbo, God will use him to surprise many. Let him not bother about how it will happen, I urge him to continue to do good, trust in God and have faith in Him.”