Human nature is indeed complex. Many people live as if the devil has sent them on an errand to destroy as many destinies as possible. They are so bad that the devil is afraid of them. They lie, deceive, kill, destroy and torment innocent souls for no just cause except to satisfy their cunning desires. Leo Tolstoy is quoted to have said “be bad but at least don’t be a liar, a deciever. Deception is as dangerous as any vice one can think of in any human society.

The deceiver preys on people’s conscience and to a large extent their gullibility. While they can’t do much damage to the psyche of the wise and learned, their antics are capable of wrecking untold damage to their worldview and general outlook towards life. It is important to protect society from deciever’s and liars who are either social psychopaths or people who seek to spread their ignorant bile around just to feel important and take advantage of people’s misery and pain to profit themselves.

It is worse when people are in the habit of deceiving themselves. Putting up fake facades and thinking they’re fooling others along with them. An anonymous philosopher submits that self deceit is the worst form of deceit, it’s like an ostrich burying its head in the sand and thinking it’s hiding from predators.

Aisha Yesufu is an unrepentant liar and chronic deceiver who has over the years misled thousands of people into following her social media handles and his numerous phony social causes. This she does to create an impression of herself as a social reformer, critic, and mobiliser. What people don’t know is that Aisha Yesufu is a sponsored thug who mismanages funds donated for phantom causes and the people’s goodwill to her personal and selfish aggrandizement.

A reference point is her role in the Bring Back Our Girls campaign where she is alleged to have embezzled the millions of naira that were raised by well-meaning Nigerians to secure the release of those innocent girls. Since the money has filled Aisha’s mouth, she no longer mentions the girls again. She has turned her attention to insecurity lapses that Mr. President and his entire security architecture are fighting day and night to restore normalcy just to score cheap political points and fill her stomach with ill-gotten wealth. Aisha is like a vulture who goes only where there are carcasses but this time around, she’ll be hungry for a while.

A few days ago a video released by Aisha Yesufu on her official social media handles saw the intrepid liar singing war songs and declaring war on the Nigerian state in the most treasonable and malicious manner. Mrs. Aisha wondered why His Excellency Muhammadu Buhari was still the president of Nigeria. What she failed to understand is that the people overwhelmingly voted the president into power for the second time. It was not a mistake and Nigerians have not regretted it, having done that a second time.

Drumming war drums and sounding as if brute force rather than the collective power of the ballot is the method of retaining power in a democratic society like Nigeria smacks of mischief and a deliberate attempt to incite violence. The silence that greeted her verbal diarrhea is a clear sign that Nigerians don’t take orders from rascals and can’t take to the street to protest simply because a misguided bigot is the town crier!

The security situation in the north and the country at large has been around before the coming of this administration. While normalcy has already returned to most parts of the region with a sharp deviation from the almost daily cases of kidnappings, banditry, and terrorism that were recorded not so long ago, Aisha is cashing on the very isolated events to make herself relevant. What she does not know is that Nigerians are not gullible and can’t be deceived by someone who is paid to criticise the government just to feed her greed.

The Kaduna-Abuja highway that Aisha referenced in her deceitful video is a lot safer with multiple military and police checkpoints as well as aerial surveillance round the clock. Aisha and her co-travelers must understand that even in America, China, Russia, Germany, and Israel with all their technological and leadership strengths have not completely done away with insecurity and will never do away with insecurity. Expecting Nigeria to be crime-free under president Buhari as if any country has ever been crime-free is highly mischievous and a ploy to distract the leadership and the good citizens of Nigeria who are queuing behind their leader and ready to provide the necessary intelligence to make the country great.

Aisha has no moral justification to question the national assembly and indeed the constitution of Nigeria. Blowing things out of proportion to fan the embers of hatred towards a serving president who is doing everything in his power to solve Nigeria’s problems is what psychopaths like Aisha Yesufu are best known for. Unfortunately for her, she has chosen the wrong target and her plot is dead on arrival.

Nigerians are not dying every day as the blatant lies Aisha is peddling purports. Nigeria is not fighting a civil war so how are people dying every day? What statistics is Aisha and her sponsors relying on? How come they are the only ones who have access to these imaginary statistics? The truth is none of these questions has a viable answer, not from Aisha or anybody in the country because nothing like that is happening.

Nigerians are happy and prospering under the administration of President Buhari. The only people who are crying are the likes of Aisha Yesufu who do nothing tangible except manipulating public opinion for their selfish gains. Of course, people like that are going to die when they lack patronage from the government. If not physical death, they must die financially and try to make everybody believe their situation is caused by the leadership of the country and everybody should join them in condemning the leadership. Aisha, you can be bad, but don’t be a deceiver, a liar!

Inciting Nigerians to take up arms against the government and possibly overthrow their president because Aisha Yesufu is no longer getting patronage from the government and does not have another stash of donated funds to embezzle is something that must not be allowed to go on without punitive measures. As much as she’s known for her noise-making and empty chants.

Aisha’s recent incitement deserves a judicial review in line with the nation’s criminal justice system. Her utterances against the president and state are treasonable. She probably needs rehabilitation to enable her to recover from her schizophrenia. Whichever way, Aisha needs to be put away as she is dangerous to the average Nigerians especially those who cannot reason for themselves.

Whereas it is not justifiable to answer those who have made themselves a laughing stock, it is important to note that the north is not in crisis as portrayed and the law-abiding people of northern Nigeria are not fools to allow an incompetent person to lead them simply because he’s from their region.

It is important to note that insecurity is not just a problem in the north. It has always been a global challenge and instigating northerners to carry up arms against a sitting president who has done so much is laughable.

Aisha Yesufu herself is certainly not the best wife ,mother or sister anybody will ask for, but she is still married, should Nigerians ask the husband why he has not yet divorced her? The answer is no because one error does not damage a person or render them useless. Despite Aisha’s glaring poor qualities, she is still married. Nigerians must therefore hold very tight to a president who has done more good than the occasional security lapses that are always contained and professionally dealt with within a timely manner.

Solomon Semaka is the convener of Save Nigeria Movement. (SNM) 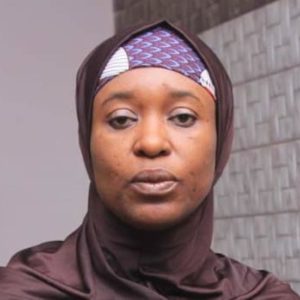