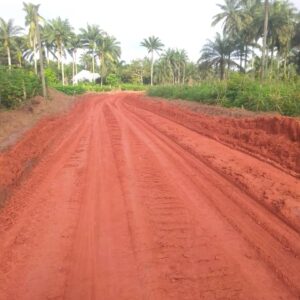 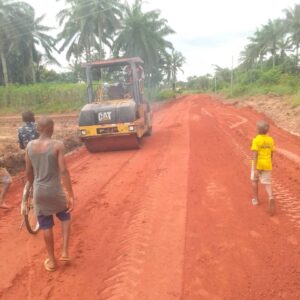 The people of Uratta Amaugwu in Isialangwa North Local Government Area of Abia State have commended Senator Orji Uzor Kalu for attracting the construction of the road in their community.

The community hailed Kalu’s magnanimity and astuteness in facilitating a project outside his Constituency.

Chief Emmanuel Afone, the President General, Urratta Progressive Union in a statement signed by him on behalf of the community appreciated Kalu for the gesture and promised to always support him in his political endeavours.

Recall that Orji Uzor Kalu, had built 67 roads in the senatorial district since he assumed office in 2019.

Kalu confirmed the works in an apology message to the people of Ohafia Local Government Area of the state over his inability to commission some road projects as scheduled.

He explained that the Senate President, Ahmad Lawan, whom he invited earlier this year to commission some of the road projects facilitated by him, ran out of time.

Others were three Boreholes in Agbaja, Amuri and Enugwu Nkporo in Ohafia LGA and 4 KM Ukwu Rubber Amaokwe-Item road and another road at Igbere in Bende LGA.

Kalu wrote on his Facebook page on the night of the visit “With a heavy heart and heartfelt concern, I apologize to the great people of Nkporo community in Ohafia Local Government Area of Abia state for not meeting up with the commissioning of my constituency projects in Nkporo. The Nkporo projects were among the projects to be commissioned by the Senate President today but we ran out of time.

“We left for home around 10:30 pm after seeing the Senate President off at the airport . With God’s grace and support of my constituents I was able to build about 53 roads in Abia North in the three years I have been a senator but only six roads were commissioned today . It would definitely not be possible to commission all the roads but we will open up as many as we can . We shall fix a new date for the good people of Nkporo for a visit . See you soon,” he said.

The Senate Chief Whip added, “I am glad that all the communities in Abia North have a project built in my honour and these facts are verifiable by the good people of Abia North . We will continue to be realistic and focused on our intentions for the people.”

Speaking earlier during the commissioning of one of the projects, Lawan described Kalu as an asset to the Abia North Senatorial District and the South East region at large.

The Senate President also bagged the “Nwanne di na mba” chieftaincy title during his visit to Item town in the Item Ancient Kingdom of the state.