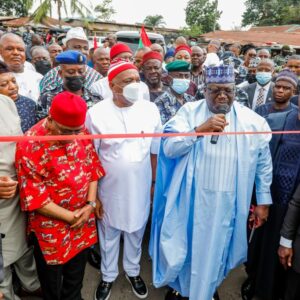 Constituents of Abia-North Senatorial District have been urged to express their gratitude to President Muhammadu Buhari over the numerous ongoing and completed infrastructural development projects in their zone. 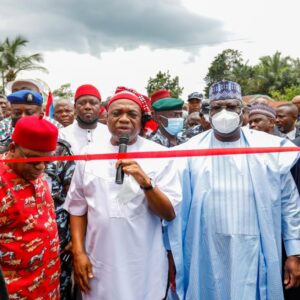 Kalu who also represents Abia North Senatorial constituency at the upper Legislative chamber told his constituents that construction of over 50 Road projects, hospitals ,renovation of schools and Borehole water projects were made possible through the backing of President Buhari.

Orji Kalu, a first time Senator elected in 2019 has continued to receive torrents of accolades as result of the massive infrastructural and empowerment projects attracted to Abia-North in his first term at the Senate. Some of the projects facilitated by Kalu include; construction of 2-5km rural roads across the five local governments in Abia North; renovation of schools, hospitals; provision of learning materials to students; distribution of over 1000 sewing machines, power generation sets , motorcycles to farmers and artisans.

According to Kalu, projects sited in Abia-North were achieved because of Buhari’s approval for the prompt release capital through the sovereign wealth fund to service rural infrastructural projects captured in the 2020/2021 budgets.

He added that his constituents were reaping the benefits of being the only zone in the entire South East and South South that voted overwhelmingly for Buhari by 68 per cent votes in the 2019 general elections.

He said; “I would like to thank PresidentMuhammadu Buhari for making the completion of these projects possible. Abia North voted massively for President Buhari and they are getting the dividends of voting for him.

“President Buhari is funding the construction of these projects through the sovereign wealth fund. The narrative that President Buhari dislikes the Igbos is false, it’s a big lie. President Buhari is a great man. Today is the first time the budget is completed at 99% under his administration. The budget cycle has been restored back to January to December.

“He makes sure every penny is released and channeled to what it was budgeted for. Past Nigerian Leaders promised but never fulfilled. At the inception of his second term in 2019  President Buhari mandated us to facilitate the construction of road projects in our rural communities in order to complement his Agricultural revolution initiative

Kalu, a two time former Governor of Abia and 2023 Presidential hopeful further disclosed that none of the past Presidents during and after his tenure as Governor has demonstrated commitment to infrastructure of the country than President Buhari. Kalu tasked the Southeasterners to eschew the notion that Buhari dislikes the Igbos saying that the ongoing infrastructure projects in Abia North and the South East is enough proof to show that Buhari loves the Igbos.

Ambassador Onu a prominent community stakeholder commended Kalu for his achievements at the Senate, describing the Abia-North Senator as the best in the history of the state.

“The truth is we have had two other governors since you left but none that will match your records. In your first time at the Senate, you have done what others cannot do. If the Presidency is zoned to the South-east, no one is better and competent as you to occupy that seat. For 30 years this road was not motorable, but now it is going smoothly, Onu reiterated.