The founder of the Synagogue Church of All Nations (SCOAN), Prophet TB Joshua, had before his death prayed for the success of the Chief Whip of the Senate, Senator Orji Uzor Kalu.

Praying for the former Abia state governor, Joshua told Kalu to prepare for a greater task of leading Nigeria. 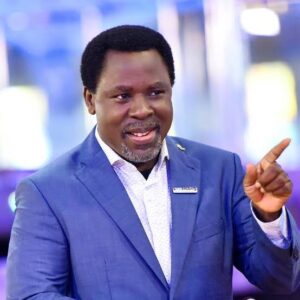 The popular cleric said the Founder and President of LoveWorld Incorporated , also known as Christ Embassy, Pastor Chris Oyakhilome was not the only man of God that revealed to Kalu what happened to him in December 2019 , adding that Kalu would be inviting the wrath of God if he ignores others.

He had accused Kalu of selective appreciation and warned him of the impending dangers of such actions.

Speaking to the congregation, he said , “It was on this alter that we were praying and the message on Orji Uzor Kalu came and I told you people ( congregation )about it.

What I said was that he would not only come out after six months in jail but will become the next President of Nigeria after President Muhammadu Buhari.

“ I don’t know how it would happen, infact I have never met him but that is the revelation I got and my duty is to say it as revealed. But I am not happy with the man because after God saved him and got him released from prison, he seems to have recognized only Pastor Chris Oyakhilome which is not fair .

“I expect him to recognize all other men of God the same way he recognized Christ Embassy. It is good he stood on the altar and gave his testimony, that shows he has fear of God and he is thankful to God. But he should extend the thankgiving to other churches. Otherwise the wrath of God will visit him .

Prophet Joshua also said if Kalu should humble himself before God , he will encounter upliftments that is beyond his expectations.

“Even if afflictions tries to rise again, he should not despair because he will definitely come out victorious . His destiny is to be Nigeria President and every other thing happening is to catapult him to that position.” He said.