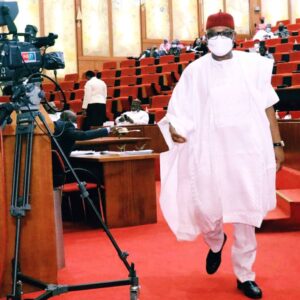 A bill seeking to enhance the Nation’s revenue generation system through the establishment of a National Tax crimes commission (NTCC) to prevent and combat tax crimes, protect taxpayers rights, amongst others has passed through second reading on the floor of the Nigerian Senate on Wednesday.

The bill which passed first reading when it was initially introduced to the Senate on Tuesday 8th March,came under the first order of the day during the consideration of bills at Wednesday’s Senate plenary received an unanimous voice vote in its favour to scale through its second reading.

Sponsored by the Chief Whip of the Senate, Senator Orji Uzor Kalu the Tax bill titled ” an Act to establish the National Inspector General for Tax Crimes Commission,2022 (SB. 951) is designed to address irregularities in Tax remittances , non-payment , under payment of taxes and to establish an NTCC to protect taxpayers rights by serving as the Tax Ombudsman.
According to the Abia North Senator, the Bill if eventually passed into law will protect Taxpayer rights as the NTCC will address the lacunas in the Tax administration system in the country by making the Federal Inland Revenue Service (FIRS) accountable and also create avenues for Taxpayers to make complaints over tax related matters.

Leading the debate on the Bill, Kalu disclosed that with the establishment of a National Tax crimes commission asides being the first of its kind in the country will also address taxpayers’ grievances and complaints promptly and without any hassle, and provide an effective redressal system.

Urging his colleagues to back the bill , The Abia North Senator said that through the creation of the National Tax Crimes Commission, criminal Tax investigators will be empowered with their unique forensic accounting skill sets, to be well positioned to combat national security threats and pursue illicit financial flows that were either derived from tax evasion, international tax schemes, cybercrime, or terrorist financing.
Providing additional justification on the essence of the bill Kalu stated that with an increased globalized economy and technological advancements, the country is witnessing transnational organized crime groups and other perpetrators abuse the vulnerabilities in the country’s financial systems.
He elucidated that the bill seeks to complement the Federal Inland Revenue Service in ensuring compliance with payment of tax; develop and implement national policy for tracking down tax defaulters and develop tax compliance strategies.
He said ; “Taxation is the key to unlocking the resources required for public investment and infrastructural growth. Therefore a fair, just, efficient and simple tax administration system is crucial to induce confidence amongst the citizens to pay their taxes as their national and patriotic obligations.”
“The Bill seeks to provide for an efficient and effective mechanism in administering the Nigerian tax system; and to protect taxpayers rights by serving as the Tax Ombudsman; educate the citizenry on tax matters;collaborate with relevant stakeholders to ensure payment of taxes and proper remittance to the Federation Account; provide a transparent platform on all matters relating to tax; provide sustainable finance and revenue for the government; review and address any complaint by a taxpayer regarding a service matter or a procedural or administrative matter arising from the application of a tax Act”.

Drawing the attention of his colleagues to the Tax Administration system of other countries, the Lawmaker revealed that  in regard, countries such as United States, United Kingdom, Netherland and Australia, have an Auditing and Investigative Independent Agency such as the TIGTA and FATCA of United States, the House of Common Treasurer Committee (HCTC) and Tax Ombudsman of the United Kingdom and the Inspector General of Taxation (IGT) and Tax Ombudsman of Australia.
He said in Africa this is also obtainable in countries such as Ghana, Kenya, South Africa etc. And when this commission is created, it will be reporting to the National Assembly and not the Minister of Finance like the FIRST.Kalu added that the essence of the bill is for the establishment of an external examiner, a scrutiniser for checks and balances in Tax administration in Nigeria.