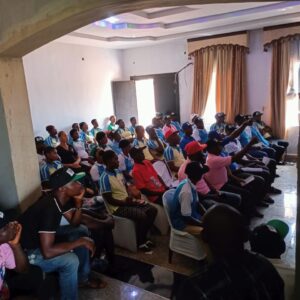 A group within the All Progressives Congress, the Orji Uzor Kalu (OUK) Southern Solution Team, has launched an advocacy to canvass support for Chief Whip, Orji Uzor Kalu to contest the 2023 presidential election. 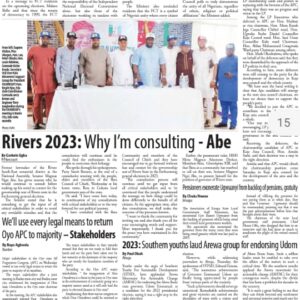 The Director General of Southern Solution headed by Hon. Louis Ndukwe, stated this while addressing the crowd during the unveiling ceremony in Bayelsa State, the leader of the OUK Movement under the aegis of Southern Solution Team,which covers four states: Delta, Bayelsa, Anambra and Edo. He was flanked by the group’s Director of Media and Publicity, Hon. Leo Nkeaka; and the OUK Coordinator in the Bayelsa, Comrade Koroye Perebo. 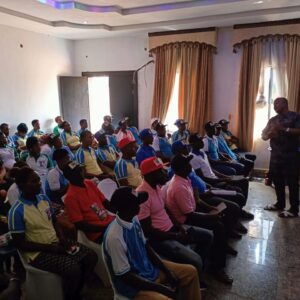 Ndukwe said that ”Dr. Orji Uzor Kalu (OUK) is an embodiment of credibility and competence considering his performance as Governor of Abia state and as the current Chief Whip of Nigerian senate. He’s a Pan-Nigerian leader who would be acceptable by all regions of the country regardless of any ethnic, religious and tribal consideration.” He elaborated. 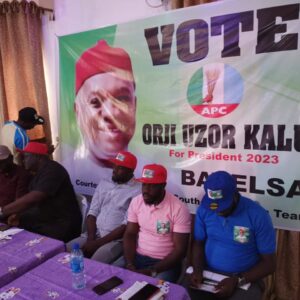 He also said his team had held strategic meetings with APC members from all the four states: Delta, Bayelsa, Anambra and Edo.

He said, “Every passing day, we see further indications of success in our mobilisation and advocacy efforts towards ensuring that Chief Whip, Orji Uzor Kalu succeeds President Muhammadu Buhari and sustain our party’s progressive ideals.

We have come to seek and solicit your support for the Presidential aspiration of Orji Uzor Kalu and to assure you that OUK is in the best position to unify Nigeria and protect the interest of the whole Nigeria, Chief Ndukwe said. 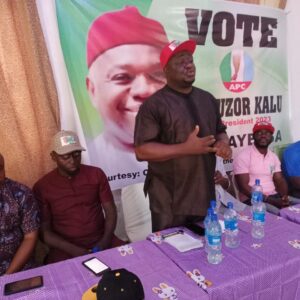 Our struggle is to see that APC gives ticket to OUK to put him in a position to be the presidential candidate of APC come 2023.
“Fellow countrymen, there must be conscious efforts from both side of the country as Nigeria cannot fathom a civil war in the 21st century and that will not favour any person or group. 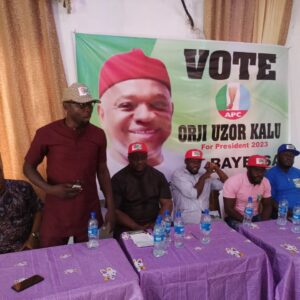 “This saleable candidate will give all and sundry a true sense of belonging, inclusiveness, fairness,equality, respect and hope of one Nigeria.”
Comrade Koroye Perebo,Ndukwe, who was two time local government chairman of Oshimili North Local Govt. council said, his movement is supporting Orji Uzor kalu because he has what it takes to be president and that with the look of things, he is the only person who is prepared to be president and give Nigerians the required leadership,direction and unity.

Senator Orji Uzor Kalu(OUK) is young, experienced,and a dynamic Southerner with the capacity we all yearn for. “Whether we like it or not we need a man who has experience in business, politics and not experimental president,not a man who will come in and have godfather somewhere. Orji has all it takes to be our next president.

We deeply appreciate the warmth and hospitality offered by the people of Bayelsa State during our visit last Friday as well as our visit to other states.
According to Director of Media and Publicity of Orji Uzor Kalu (OUK) Southern Solution Team, Hon. Leo Nkeaka, further said that Orji Uzor kalu is the right choice for us as far as 2023 is concerned. If it is the desire of Dr. Orji Uzor kalu, if it is his ambition to be president let him be and I will appeal to Nigerian to vote for him. Let me tell you after Obafemi Awolowo of blessed memory, who was ready to offer his selfless service to this nation, Kalu is the next person who is prepared to be President and give this country the needed governance and, he has what it takes to be president.”

“As far as I know, Kalu is a man who has managed his home and businesses very well and will be able to manage a country? OUK is a young man with business empires everywhere what is his main concern now other than how to use his wealth of experience to better the lives of ordinary Nigerians.

“Dr Orji Uzor Kalu is the most appropriate person that Nigeria needs at this moment of national despair in order to galvanize the growth and development of our country. He is a specimen of a detribalised Nigerian that is competent, conscientious and someone that cannot be distracted,” he said.
OUK Southern Solution Team, Coordinator in the Bayelsa, Comrade Koroye Perebo thanked the OUK team for the visit and wish them well in their programmes.

If no be Kalu,na who else e go be?