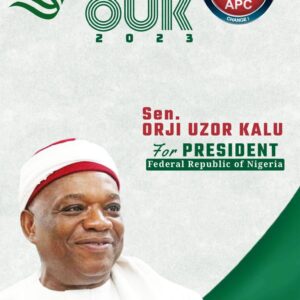 Those who thinks less of orji Kalu, does that at their own peril, no hunter will ever ignore the shadow of a wide animal more especially when the forest appears turbulent and tick.

OUK historically remains the most influential politician amongst the wisemen of the east don’t mark me for your argument am not in for that shit.

Orji has raised men who have also chosen their part in our nations political scene, Sen. Enyinnaya Abaribe was his deputy during Kalu’s first tenure as the governor of Abia state, currently he is the minority leader of the Nigeria senate, Sen Theodore Ahamefule orji was his chief of staff and later a governor of Abia state for 2 tenures, Rep Benjamin Okezie Kalu the spokesperson of the house of reps was his senior special assistant on MDGs and later a local government chairman of Bende LGA, Comerade Chris Akomas was his then special assistant on education, commissioner for land and survey, Deputy Governor and presently a South East federal commissioner at RMAFC , Chuka Odum was his commissioner for special duties and later served as FCT minister for state as well as the minister for environment, housing and urban development(state) Femi Adesina was his chief editor at sun newspaper and currently special adviser on media and publicity to president Mohammed Buhari. In 2002 OUK made Dr Victor Okezie Ikpeazu the Executive chiairma of obingwa LGA, presently OVI is the governor of Abia state and you think orji should be ignored? 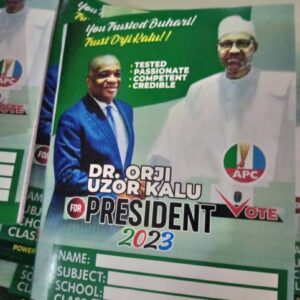 The man is not a Saint neither has he ever been a coward, OUK has guts and balls, his cosmopolitan views can’t be hidden, the man like B A T suffered the stringent hammers of OBJ when Abia allocation was withheld for months and oil rich obigbo ceeded to rivers state by Baba Iyabo because he spoke truth to power, this was when Nigeria was working under PDP, then injustice wasn’t stereotyped but they thought we have forgotten those attraocities 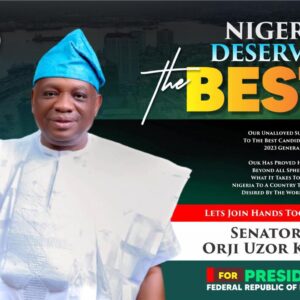 Orji Kalu was amongst the formative pillers of People’s democratic party at its formation in 1999 and nobody will tell you this because we have allowed musicians alone to tell our story.

In 2007 orji Kalu single handedly founded and funded people progressive alliance (PPA) and installed Ikedi Ohakim as the then governor of imo state, in a PDP enclave and you think such man should be ignored, well those who don’t know the power of mosquitoes must endeavor to go to bed with a female specie and report back to us, then we will allow them share their plight in the table of men.

The man has run successful businesss both at home and abroad, I wouldn’t know your grievances against him, keep it to yourself but give him a fair political judgment, the man has fallen and has risen several times and that’s the character of a warrior, so, take it or leave it.

OUK is a political deity
Tell them father, I said so.