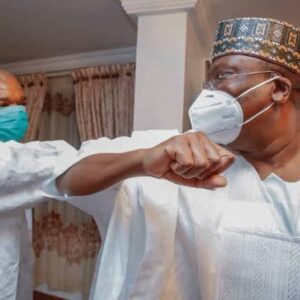 Former Governor of Abia State and Chief Whip of the Senate, Dr. Orji Kalu has described the Senate President, Senator Ahmad Lawan as a patriotic statesman and compassionate politician.
Kalu while acknowledging the contributions of the Senate President to the growth and development of Nigeria, stressed that the celebrant is a strong advocate of democracy.
The Senate Chief Whip extended his greetings to family, friends and political associates of Senate President, adding that the celebrant has consistently demonstrated selflessness, patriotism and generosity in all his endeavours.
In a goodwill message, Kalu prayed for longer life for the celebrant, noting that the Senate President deserves commendation for complementing the efforts of the President Muhammadu Buhari in repositioning the country.
He said, “on behalf of the people of Abia North Senatorial district, I congratulate the President of the Senate, Senator Ahmad Lawan on the occasion of his 63rd birthday anniversary.
” The Senate President is an accomplished statesman, consummate politician and philanthropist of repute.
” He has been complementing the efforts of the  President in building a prosperous and united Nigeria.
“The Senate President has  sustained his large followership in the political space in view of his outstanding leadership attributes anchored on probity, transparency and accountability.
“In his current capacity , the Senate President has been a rallying point for his colleagues and contemporaries.
” The celebrant deserves commendation for  advancing the cause of the people”.
Kalu prayed to Allah to strengthen the celebrant in his pursuits.

" Adopt Orji Kalu As Sole Candidate, Leave The Rest For Us"  Arewa Group Charges Ndigbo A political group has urged southeast politicians to close ranks so as to install one of them as president come 2023. The group, Arewa Youths for Orji Uzor Kalu (AYOUK), is a coalition of  youths across the 19 Northern States, working for the actualisation of Orji Uzor Kalu presidency in 2023. The National Coordinator, Comrade Yakubu Arigu Muhammad, made the suggestion when he spoke with journalists on Monday, in Lafia, after inaugurating the officials of the  Nasarawa State Chapter of the group. He said southeast politicians must engage in actions that would make the plan come to fruition and eschew actions that promoted disunity among them. “Our brothers from the southeast should imbibe the virtues of tolerance and civility by coming together and adopting a sole candidate, in the person of Dr. Orji Uzor Kalu. “Worthy of note is that democracy is game of numbers hence we reiterate our earlier endorsement of the Chief Whip of the Senate, Senator Orji Uzor Kalu as our choice to succeed President Muhammadu Buhari in 2023. “Therefore, we are appealing to Ndigbo to unite and adopt the former Abia state Governor as their sole candidate. Once that is done, Ndigbo should leave the rest for us! “Southeast political, religious and civil organisations’ leaders must be sagacious, tactful, dynamic and diplomatic in honest and patriotic quest to actualise Nigerian president of Igbo extraction,’’ he said. Recall that the group had in a statement last year's November, said that Kalu’s managerial skill, experience and national appeal put him in the best position to rule Nigeria in 2023. They said: “This may sound odd in the eyes of Nigerians especially those nursing the intention to run for the number one seat in the land. Be that as it may, Senator Orji Uzor Kalu’s acceptability demonstrates the settled resolve of the youths in the 19 Northern states to support him succeed President Muhammadu Buhari. “Kalu is a result-oriented leader with a proven track record that can sustain and consolidate the gains recorded by the current administration. “Kalu is the best bet for the APC in 2023. He is a  presidential material with experience in the private sector; executive and legislative arms of government. “It is imperative to state that, with Nigerians pushing for a President of South-East extraction, the stakeholders in APC need not look any further because the dutiful, and detribalised Orji Uzor Kalu is the right candidate for the party. “His influence cuts across all the six-geopolitical zones in the country. Don’t forget he was the Chairman of Borno Water Board at the age of 25; Chairman of multinational companies and, a former Governor of Abia State. “We are totally convinced that what Nigeria needs right now is a courageous and vibrant  leader who is capable of managing a complex nation like Nigeria. That resourceful manager is Kalu.”