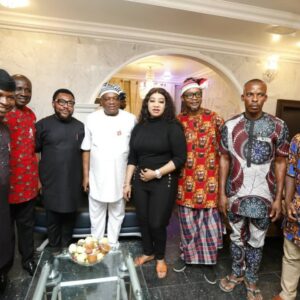 In what could be described as a show of appreciation and reaffirmation of political supremacy,Political stakeholders of Arochukwu local government council area have reasserted the former Governor of Abia State and current Chief Whip of the Senate Senator Orji Uzor Kalu as their leader in the state following his giant strides in their Senatorial District. 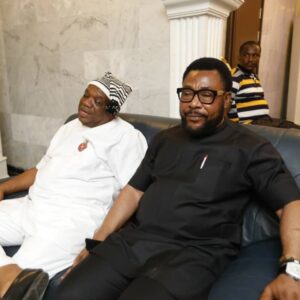 Chronicling Orji Kalu’s antecedents in the history of Abia Politics the leadership of the local government council affirmed Senate Chief Whip  as the father of Abia Politics, stating that all Political leaders in the state passed through his tutelage.

Speaking during a recent courtesy visit by the Senate Chief Whip to his Arochukwu residence, Chairman of Arochukwu local government council, Hon. Prince Daniel Kalu conveyed his gratitude to Kalu for his massive infrastructural interventions to their Senatorial district, describing it as unprecedented.

Prince Daniel elected under the state’s ruling People’s Democratic Party (PDP) also used the occasion to acknowledge Senator Orji Kalu as he’s political  benefactor stressing that the APC Chieftain introduced him to Politics and has remained supportive in his career ever since.

“Senator Orji Uzor Kalu is our leader, I say it boldly that he introduced me into Politics and he is the genesis of whatsoever I am today.

“Orji Kalu taught us the business of politics and he remains the father of Abia Politics , every Politician in Abia State today started under him directly or indirectly.

“We are immensely pleased by your good works in our senatorial zone, the infrastructure, empowerment and your bills and Motions at the Senate, you have indeed made us proud and you have always been a hearted man. On behalf of my family , the executive council I want to thank you for this special  visit, Hon Dan concluded”.

In his remarks, Ward Councillor,Hon. Eleanya Ejieke, reiterated that Senator Kalu launched the Arochukwu local government council chairman into Politics, likewise other notable Political figures in the state. Eleanya recalled how Orji Kalu in 1998 single handedly financed the activities of the PDP in the state as well as at the National level. While thanking Kalu for his qualitative representation of Abia North  at the National Assembly, Eleanya maintained that the Senate Chief Whip will be regarded as the founder of Politics in Abia State.
His words “We Thank you for all you have done for us at the Senate , in 2007 you introduced our LGA chairman into Politics and you have always supported him in all his Politics endeavours from then till date.

Speaking further he said “You are a child of grace . It is a well known fact that though you are a ranking member of the APC but you financed the People’s Democratic Party (PDP) during its formation in 1999. We the entire political bloc in Arochukwu are grateful because all what we are today in Abia State can be traced to you. We, the fifth executive council, are grateful to you. We have seen the roads your blueprints are scattered all over the LGAs in Abia North.

Kalu in his earlier address, thanked Prince Dan and his executive council for the warm reception, the Chief Whip whose visit was to commensurate with the LGA chairman over the passing on of his mother also appreciated his Good works in Arochukwu.

Speaking on Politics, Kalu stated that Leaders were instituted by God and should be given maximum support by the people. The APC Chieftain emphasised that though he brought the current Governor Okezie Ikpeazu and past Governor Theodore Orji into politics he has continued to maintain a good relationship with them because of his belief that leaders are chosen by God. Kalu also cautioned against needless criticism of the current Governor Okezie Ikpeazu he asked the people to rally round to Governor inorder to conclude his tenure successfully.

Breaking: Enyinnaya Abaribe Could Not Show Us Any Tangible Completed Project For 22.5 Years Of Being In Corridors Of Power- Jaja Martins