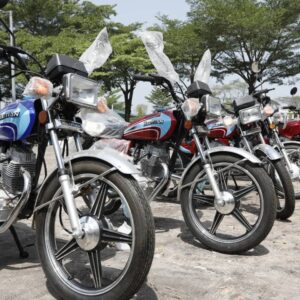 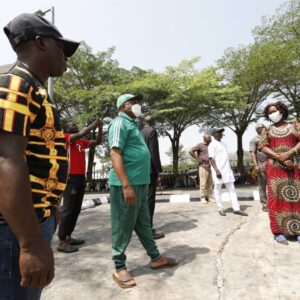 Trooping into his Igbere camp Neya residence on Monday, constituents of Ohafia LGA were presented with the Machines to enhance their Artisanal and Agricultural trades.

Like the previous exercises, the beneficiaries were provided with over 300 motorcycles, 500 sewing machines and other items to support their different trades particularly those involved in fashion designing.

Speaking on behalf of the elated empowerment recipients Ohafia APC Chairman , Prince Emma Nwosu , while commending the Senate Chief for the gesture he he described as laudable reeled out his achievements in the areas if infrastructure , bills and Motions. He reiterated the support and commitment of Abia North electorates towards the political aspirations of Senator Orji Kalu,saying that the destination is ‘Aso Rock’.

On his part Chairman of the OUK Movement in Ohafia, Mr. Anaga Uche appreciated Senator Kalu he emphasised that the items were in line with the current needs of the constituents. Anaga urged the beneficiaries to also use the items to empower others.

He said ” Orji Kalu is God sent, it’s no longer need that he is a first time to Senator who has constructed so many roads in our Senatorial zone.  God has used him to bless us and we thank him for the good works. I urge all the beneficiaries to use the Machines to empower others. Those that have already can give it to others who don’t. He concluded,”

Earlier in his address, Orji Kalu described himself as a servant of people, stating that his constituents were reaping the benefits of voting massively  for him and President Buhari under the ruling All Progressive’s Congress.

” President Buhari has a special love for Abia North, that is why he is assented to every request in the interest of our Senatorial zone. We are only zone in the Southeast that gave him and the APC the highest bloc of votes.
“Democratic process might be slow but it’s highly beneficial, and the beauty of democracy is the time limit. Any elected official has a tenure that has an expiry date. Any lawmaker that does not perform up to expectation will be voted out.

It can be recalled that Senator Kalu commenced the distribution of empowerment materials to his constituents.

So far ,Kalu has distributed a set of 350 motorcycles, 200 sewing machines and other empowerment kits to Isuikwuato Local Government Area of Abia North senatorial district.

That was  followed by distribution of another set of 400 motorcycles and 150 generators to his constituents in Umunneochi Local Government Area.

On Friday, the Senate Chief Whip extended the distribution of the self-reliance items to ward constituents in Bende local Government area. The beneficiaries of the items constituted leaders of the All Progressive’s Congress and leaders of the OUK movement group.