Breaking News: “I will neither praise nor condemn you” – Orji Kalu tells Ikpeazu

Breaking News: “I will neither praise nor condemn you” – Orji Kalu tells Ikpeazu 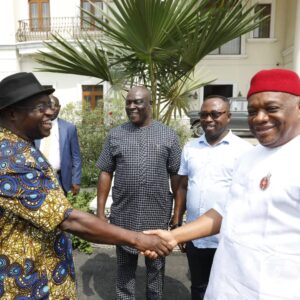 The Chief Whip of the Senate, Senator Orji Uzor Kalu has said he will not criticize or praise the Governor Okezie Ikpeazu-led administration because of some personal reasons.

The former Abia state governor disclosed this when he paid Govenor Okezie Ikpeazu a courtesy visit at his country home in Umuobiakwa, Obingwa LGA.

“This governor is my mother’s son, that’s why you can never see my media group attacking him because my mother will not agree.

“When I wanted to come, I told her I was going to see the governor and she said greet him for me. I thank the governor for having me,” Senator Kalu said.

He explained that the meeting was first of its kind where he had a sincere discussion with Govenor Ikpeazu.

“We’ve had our discussion, we discussed the good, the bad and the ugly. We were naked, the both of us saw face to face, we discussed. He told me the truth and I also told him the truth.

“I reminded him that when I was the governor, I used to go with him to ANPP House, APGA and  I was not partisan. I want  him to be that kind of governor. Let him not be a Governor that will limit  where to  enter. Let entry point not be a barrier to you.

“This is our state, after politics both of us would be in the old Governor’s club.”

“You better join me in the Senate of the Federal Republic of Nigeria in the next 15 months.

“This is bipartisanship and I am not afraid of anyone, I speak my mind at all time. I told him the day I came with the Senate President that we need him in the Senate.  So, the ball is on you and the game is on you.”

On the state of roads in Abia, he appealed to Governor Ikpeazu to consider reconstructing the Umuahia-Uzoakoli-Alayi-Igbere-Ohafia road.

In his words: “Our people have requested for the road from Umuahia to Uzuakoli, Alayi to Igbere and also goes to Abiriba to be done.

“I have put One billion naira  on the road. Please find the contractors doing all these your fine roads here to come and do that road. You said you have sent someone there but I said no, find those doing this particular one here to do that road. May God keep us alive.

“I want to thank the Governor, I will never praise nor criticize him in public but I thank him for been steadfast. When you are a leader, you are a dumping ground. When you come out, the people will appreciate you.

” I hope history will write you on the good side. History is a very big thing, like I told the governor that he knows I can’t praise nor condemn him but I leave him for history and I’ve told him so many thing that would make history to lead us well,” he said.

Just In: "Your Visit Has Opened Doors of Relationships" -  Ikpeazu tells Orji Kalu