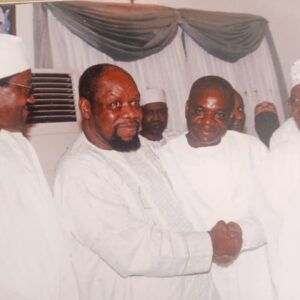 After a peaceful reconciliation between the generals that runs the show in Nigeria, organized by $star ⭐ boy”, the man of the moment Sen. Orji Uzor Kalu , they were all conferred with a prestigious chieftaincy awards in Igbere ancient Kingdom. 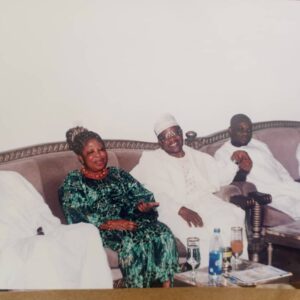 When they say follow who know road, “e get why”. Orji Kalu didn’t start today to galvanize support for a one united Nigeria. His love and compassion for a united Nigeria dates back in the 80s, from where God saw his pure and sincere heart towards having a better country, where different tribes and tongues would cohabitate amicably in peace and love. God 🙏 blessed him tremendously beyond what no man could do.

Some people somewhere saw this, and were uncomfortable, they conspired, had a meeting, and agreed that why will this man have excess money at a very young age and have power simultaneously. What they forgot is that, fighting a man of grace with heavenly anointing is an effort in futility, because you will be hitting a tipper with full load of sand.

My love for Orji Uzor didn’t start today, it started back in the days when I was a small boy. I was amazingly overwhelmed by his charisma, how social, down to earth, and simple he was.

For someone who could do these mighty things, setting the pace for peace to reign among military generals as far back 2005 at a very youthful age, we need no prophet to tell us that, if Nigeria is handed over to him to lead as the president, he will definitely massage the egos of different ethnic groups that live in Nigeria. He will so manage our diverse differences so well, because he has a special, natural skill in doing so. He is one Nigerian Politician that’s a detribalised Nationalist devoid of any sort of ethnic bigotry.

We therefore call on APC stakeholders to rally round this great son of Igbo Land, in making sure, APC presidential ticket is ceded to the South East, so as to make committed effort to see to it that this illustrious Son of Nigeria, gets a fair share of the struggle. It is something the party hierarchy should intentionally do, to give a sense of belonging to South East geopolitical zone which hasn’t produced a democratically elected president since 1960.

It is our wish OUK gets the APC presidential ticket, because he is the most qualified and ready candidate, who has painstakingly prepared for this exalted daunting task since 1999. He is competent but, not desperate to win this rigorous race.

Nigeria will definitely receive a fresh breath of air, if he’s given the opportunity to pilot the affairs at Aso Rock as the C-IN-C come 2023, because, he has led by example and has shown pragmatic leadership qualities and prowess since he became the governor of Abia State in 1999 till date, he has been so consistent in galvanizing and breeding a new army of youthful leadership that will take over from him.

He has this willingness to encourage youths, by mentoring them both in politics and in business. Orji is someone who has more 25,000 Nigerian youths on his payroll both in public and private sector.

His personal assistants are all young men and women, because he is young at heart. He can easily play with youths, and also do proper business and politics with main stakeholders .

There’s no other better hopeful candidate than Senator Orji Uzor. He is indeed our consensus candidate. He will surely make us proud as president of Nigeria.

2023 Presidency : My Campaign Will Rock Like Hurricane - Sen. Orji Kalu  The chief whip of the Senate, Senator Orji Uzor Kalu, has stated that he is competent enough to be Nigeria's next President of the country. Kalu told newsmen in Abuja on Wednesday, January 19, that if the APC zones its ticket to the southeast, he will commence serious campaignsHowever, the former Abia governor made it clear that he is in no way desperate to become the president in 2023 Abuja - Senator Orji Kalu has stated that he is very well capable to lead Nigeria but is not desperate to attain the presidency. Kalu made this submission on Wednesday, January 19, after the Senate's first plenary session for the year in Abuja, Channels TV reports. He disclosed that his recent meeting with President Muhammadu Buhari in Aso Rock was mainly on national issues like security and electoral law. The former Abia governor said he enjoyed a robust and age-long relationship with the president even before he got into power, hence the meeting was not linked to the 2023 presidential election or his interest in it. Kalu noted that if the All Progressives Congress (APC) zones the ticket to the southeast, he will begin massive campaigns which, according to him, will roll out like a hurricane. His words: "I have said before that there are only two zones that have not been president: the Southeast and the Northeast. Once it’s zoned to the Southeast, I have the capacity and the capability will roll out my campaign and rock like a hurricane. “It’s overdue for an Igbo man to become a Nigerian president; I believe the Southeast should produce the next President and it’s going to happen.” Earlier, Kalu on Tuesday, January 18, had a talk with President Muhammadu Buhari at Aso Rock Villa. Kalu disclosed that he discussed some pressing national issues with the president. The APC chieftain who has indicated an interest in the presidential seat in 2023, said he left the president in health and looks forward to a better Nigeria.