AHEAD of 2023 general elections with heightened political permutations and strategies, Civil Society Organisations under the auspices of Coalition of Civil Society Groups, CCGS, Friday, resolved to support southern presidency. 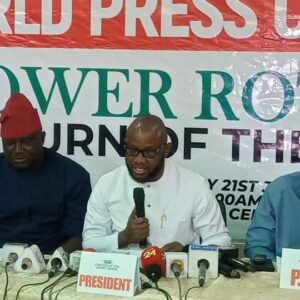 This stand by CCGS was declared during a media conference held in Abuja, where the President, CCGS, Basset Etuk Williams, and Secretary General, CCGS, Abubakar Ibrahim, in an address read pointed that since the return of democracy on May 29, 1999, there has been “an unwritten convention in the country for power rotation between the North and South.” 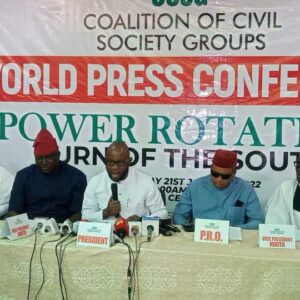 The Groups also called on the ruling All Progressives Congress (APC), the opposition Peoples Democratic Party (PDP) and others to in the interest of unity, equity and equality zone their presidential tickets to the southern part of the country in the 2023 general election, saying that the north having held sway since 2015 it would morally and political right to zone presidency to the South.

According to the group, “This is lawful and can guarantee peace and unity of the country” and that “there won’t be either APC or PDP if there is no country called Nigeria.”

The Group said: “We have watched with keen interest various agitations across the zones of our federating units, and we come up with agenda of championing and clamoring for Power shift to the South come 2023.

“There is no doubt that the North has had its fair share of the country leadership and now it is time to zone the Presidency to the Southern part of Nigeria which in our own opinion deserves it.

“Rising from our expanded National Executive meeting, we resolved to get involved and join in the call for power shift to the South come 2023.

“It baffles us that as the debate intensifies, most of those involved don’t know what is generally at stake especially as it relates to unity of the country.

“We have witnessed sharp division along religion line ahead of 2023 general election. The current security situation and supremacy of a region is also affecting and shaking the unity bedrock of the nation.

“Political gladiators across the divide have taken up arms and fight via exchange of words on power rotation. Some want it to remain in the North, while others want it back to the South for equality sake.”

The group however, expressed dismay over agitations rising on rotation of the presidency, and according to it, “Presidential election in Nigeria is highly influential and powerful as we all confers greatest sense of belonging to the federation on any ethnic or geopolitical zone that produces the President.

“This no doubt has deepened the agitation for power shift by various regions and we thus resolve to implore all major political parties to have a deep think ahead of their convention and zoning by ensuring that the country remains united and sense of belonging is given to all by zoning the Presidential tickets to the Southern Part of the Country come 2023.”

2023: Why I changed my mind after telling Tinubu,Umahi,Anyim I won't run for President - Orji Kalu