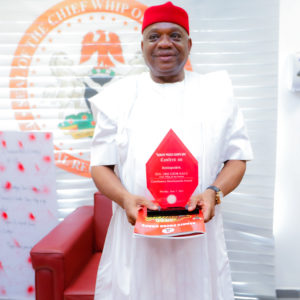 Abia North Peace Foundation, ANPF, a socio-political and peace advocacy group, has lambasted one Isaac Nkole for saying that the Chief Whip of the Senate, Senator Orji Uzor Kalu was planning to return to the People’s Democratic Party (PDP).

ANPF in a statement signed by its Director of Media and Publicity, Precious Kalu said the statement by Isaac Nkole was regrettable and shameful, advising him to stop Hallucinating and desist from taking the deadly and illicit  methamphetamine drug popularly known as Mkpuru Mmiri as it was adversely affecting his sense of reasoning.

The group alleged that Senator Mao Ohuabunwa having failed in his bid to become PDP’s National Secretary was desperate to return back to the Senate noting that his abysmal performance as a federal lawmaker was hunting him, hence, his desperate move to lunch a campaign of calumny against Senator Orji Uzor Kalu.

“Isaac Nkole, a known facebook urchin and his paymaster should take a break from taking mkpuru mmiri drug as it is beginning to affect their sense of reasoning.

“It is obvious they are scared of the popularity of the Chief Whip of the Senate across the State and Nigeria at large. They are afraid of a party that gave President Muhammadu Buhari 68% votes in 2019. They are scared of the over 31 rural roads in Abia North and other numerous achievements of Senator Orji Uzor Kalu.

“No matter the level of their campaign of calumny, Abia North won’t return to the era of sharing frypan. We have moved.  People easily try to forget the Iroko called Orji Uzor Kalu . A detrabilized man who associates with everyone is not expected to close his doors against any August visitor . Kalu is an ardent supporter of President Muhammadu Buhari and a frontline member of the APC.

“We are solidly behind Senator Orji Uzor Kalu and shall vote for him again if he decides to run for any position in 2023. Talking about him defecting to PDP is wishful thinking,” the group said.

Just In: Umeh Kalu, SAN, to Chinedum Orji (Ikuku Abia): You Are A Mistake And An Inglorious Bastard.