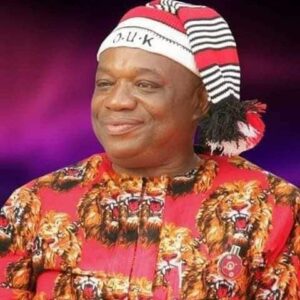 Former Governor of Abia State and Chief Whip of the Senate, Dr. Orji Kalu has urged Nigerians to be steadfast, patriotic and optimistic ahead of the new year.
Kalu while applauding the citizenry for their continued support for President Muhammadu Buhari, cautioned the political class against inflammatory utterances capable of polarising the country.
The former Governor stressed that leaders at all levels of government must ensure the welfare of the people is a top priority in their agenda, adding that the government and the governed must play complementing roles in building a prosperous, united and indivisible Nigeria.
Kalu, who made these remarks in his Igbere country home, during the distribution of end of year gifts to his constituents as part of his annual end of year activities, called on well meaning Nigerians to embrace philanthropy.
He said, ” as we approach the new year, it is imperative to reflect on our achievements and challenges as individuals and as a nation.
“No doubt, 2021 was a year of sober reflection and celebrations.
“For the country to attain enviable heights, we must shun acts that will set the country divide the country.
” The time is now for Nigerians regardless of political, ethnic and religious differences to sustain peace and harmony in a bid to build a just society.
“No country can thrive in an atmosphere of disharmony.
” Nigeria’s cultural, ethnic and religious diversity must be harnessed for growth and progress of the country.
“We must not allow political or religious sentiments to take Nigeria backward.
” Let us engage people in government in constructive criticisms as against hate speech and campaign of calumny.
“In the new year, we must imbibe good moral conduct in our daily pursuits for the sake of peace and unity” .
The former Governor wished Nigerians a prosperous new year.