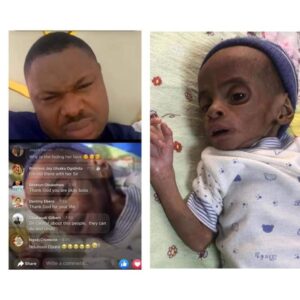 “No matter the narrative you people are pushing, this beautiful soul Chidubem was starved l, the doctors said “MALNUTRITION”

Who starved Chidubem, in whose custody?

Madam Tina and her husband left Lagos to the East for Christmas (December 2020) and also with the intention of getting a house maid, they met and convinced 17yr old gift to leave the village and come to Lagos with them. NOTE; The girl and the couple never knew she was pregnant

Getting to Lagos, She became their maid and later found out that she was pregnant. She was given little or no support from the couple till the birth of the baby

After delivery the maltreatment became worse; one day she was sent on an errand by 2am (November 2021) immediately she came back, her madams husband stopped her from entering the house and told her that she won’t sleep in their house again and threw her luggage outside without her son, so she slept outside.

According to her “Getting back to the house the next morning Her child was locked in the house alone with a changed padlock”
She ran immediately to her Neighbors for help, they in turn contacted Madam Tina and she refused to come and open the door and release the child to her.

Madam Tina became very hostile to the girl and told her that she was owing her 5 million Naira and that she would only get her child when she has paid the said amount. Left with no other option, she began to look for what to do to pay up this fictitious debt.
While all this was going on Gift was also informed by Neighbours how her son was being kept on tiled floor bare bodied (locked in the room)

THEN
When they saw Dubem was malnourished, looking pale with blood patches
They decided to drop the boy with a neighbor