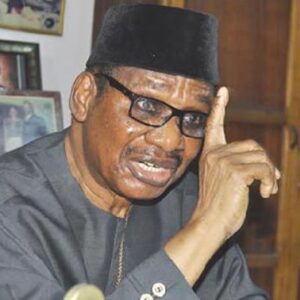 He also said the National Assembly will be making a huge mistake if they tried to override the President by passing the bill into law through two thirds majority vote.

Speaking with Daily Independent, Sagay said imposing direct primaries on all political parties is dangerous and could threaten the future of Nigeria’s democracy if passed into law.

That will be a huge mistake to try to override him over a disaster that he just averted. I don’t think we should become suicidal into trying to carry out something that will obviously fail and plunge our democracy down the cliff”.

“So, Buhari on this particular issue has reflected very deeply and has given very concrete reasons on why the idea of direct primaries is absolutely unacceptable, dangerous and even could threaten the future of our democracy and the country”.

Sagay advised the national assembly to remove the direct primaries clause and then send back the bill to the President for assent so that other good things in the electoral bill such as electronic transmission of results can become law.

“ I agree with him on why he declined assent to the bill. The national assembly has to go back now and remove that particular provision and send it back for assent, so that we can retain all the electronic transmission of results that the bill contains, including the new system of accrediting voters and so on”