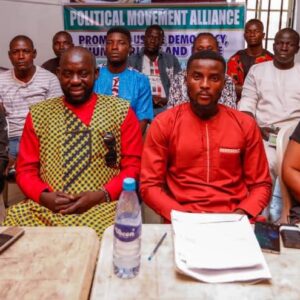 To actualise zoning of the 2023 Presidential slot to the Southeast by Political parties in Nigeria, Pro-democracy group Political Movement Alliance (PMA) , has announced a 70 days fasting and prayer exercise to seek divine intercession.

The group announced this via a circular jointly signed by its publicity secretary Engr. Nasiru Bashiru and National Secretary, Comr. E. Okere dated December 12, 2021 and addressed to the leadership of the group at various levels.

PMA explained the spiritual exercise is important for God’s intervention on the need for the leadership and stakeholders of Political parties to zone their Presidential tickets to the Southeast geo political zone. The group had in an earlier statement declared it’s support for Igbo Presidency and endorsed the former Governor of Abia State and current Chief Whip of the Senate Senator Orji Uzor Kalu to replace President Buhari in 2023 citing the basis of equity, justice and fairness. 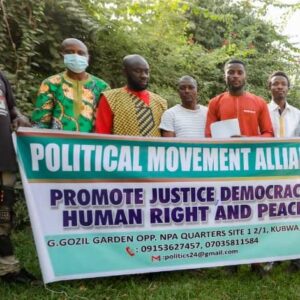 Giving details of the exercise in it’s communique on Sunday, Nasiru disclosed that the fasting and prayer will begin from 14th December 2021 – Monday,February 2022 within the hours of 6am- 12pm. He added prayer sessions will be organised on each day at 4pm, asking members to gather at their various meeting points or join virtually.

Nasiru however pointed out the exercise is an interreligous  one which will  involve both Muslim and Christian faithfuls including Traditional worshipers.

Citing biblical and quranic verses, the Publicity Secretary said the quest for the Southeast to produce the next President of the country is a divine mandate ordained by God in the overall interest of every Nigerian, while emphasising God’s directives on equity and fairness.

The group while urging it’s members and other Nigerians to pray for zoning of the Presidential ticket to the Southeast also asked for prayers for peaceful conduct of subsequent 2022/2023 elections, peace and progress of the nation among other prayers

The circular read in parts;

“This is to inform you that the leadership of PMA in consultation with state and local government coordinators,in view of the decisions taken at our last meeting as regards the zoning of the 2023 Presidency to the Southeast and other related matters has considered it imperative and absolutely necessary that the leadership and stakeholders of Political parties needed prayers for God’s directive and divine intercession to heed to the clarion call.

“Accordingly, all members are expected to assemble at their various meeting points in their various States by 4pm each day for the prayers in gestures of supplication and pray fervently to God to guide and influence the decision of Political party stakeholders to cede their Presidential tickets to the South East geopolitical zone.

“It is with a high understanding of the spiritual playing out in the physical and in politics that we, members of the Political Movement Alliance (PMA) , call on all Nigerians to join us in a 70days prayer fasting for the actualization of an Igbo president in Nigeria by 2023.

“We must inform Nigerians that this 70 day spiritual exercise is an interdenominational one which involves Christians, Muslims and Traditional worshippers who believe in our collective course for the purpose of unity and progress.

“Every member is directed to pray fervently with their Political party souvenir i.e: party flag, banner etc. In line with the COVID-19 protocols virtual links will be created and released in due course for members to participate in the prayer sessions.

“It is important that while we pursue the course of making an Igbo man a Nigerian President through every democratic means possible, it is also imperative that we also seek divine intervention, because our nation is so dearly loved by Almighty God. The Igbo Presidency course is not just a Political course, it’s a divine mandate ordained by God himself for the good of all Nigerians.

“While we await the Presidential Primaries in 2022, fasting and prayer will exemplify our struggle of spiritual intercession. The promise is that God will use an Igbo man to salvage this country from its economic, security and tribal nepotism issues which we are currently experiencing.

“This is a time for Nigerians to rise above primordial sentiments and be patriotic to support the Igbos to lead the nation come 2023. As religious believers we understand Almighty God is “just” with attributive elements of equity,fairness and justice in all ramifications including politics, and for Nigeria to progress the supreme being of those elements has to be called upon thus the Call for God’s intervention in our political landscape becomes pivotal.

“Equity, fairness and justice is a divine directive from God to both Christians and Muslim faithfuls. Among other biblical quotes in Matthew 19:16 -20:16, God used the parable of the workers in the vineyard to provide us a startling illustration of our advocacy on equity, justice and fairness in the pursuit of Igbo Presidency.

In the Holy Quran  Justice is a divine command from Allah, Quran 16:90 :“God commands justice and fair dealing…”

“In this verse, Allah directly commands Muslims to be just and deal fairly – as believers, we must consistently be aware that these values are an integral aspect of our faith.

“In the light of these, the following are the suggested prayer points to be followed during the said prayer meetings:

“That God guides the decisions of Political leaders in favour of the Southeast to produce the next President of the country in 2023.

“That God will Grant peace and end the crisis in all political parties in the country particularly the APC.

“Pray for prosperity, peace, and love in our nation, end insecurity, kidnapping, banditry and all forms of Criminality.

“That our leaders rise above religious, ethnic and tribal sentiments and do what is right and just in the interest of the country, so as to douse ethnic and religious tensions we have presently.

“Pray for our God’s protection and guidance on our dear President to complete the good jobs he initiated and a successful hand over to an Igbo man.

“We reinstate our earlier declaration and firm belief that aside equity, justice and fairness in the quest for an Igbo man to become a Nigerian President. The Igbos have over the years demonstrated to be the most patriotic citizens since the existence of our nation despite their perceived marginalisation and ethnic profiling they have believed in the oneness of this Nation, they are the only people that have confidently established their livelihood in other geopolitical zones which they have found themselves. They possess the dexterity, finesse, political sagacity, proven economic know-how, social capital across board, North, East, West and South to lead our nation to greatness.

The group also announced that it would announce a date for the commencement for mass mobilisation for Senator Orji Kalu by January 2022.