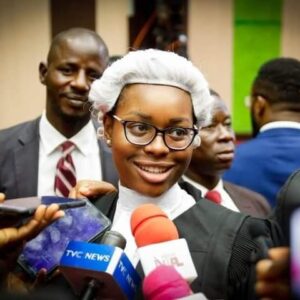 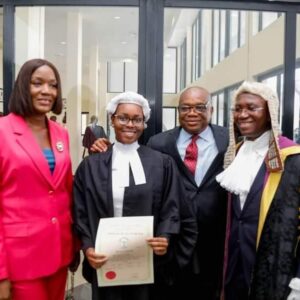 Daughter to the Senate Chief Whip, Senator Orji Uzor Kalu, Ms Zina Orji Kalu was on Tuesday inducted into the legal profession at the 2022 call Bar ceremony held for graduating students from the Nigerian Law School.

Zina graduate of University of Buckingham in the United Kingdom, LLB Law degree joined over one thousand of her colleagues to be inducted into the prestigious law profession at the Body of Benchers in complex in company of her visibly delighted father and his Wife Mrs. Ifunanya Kalu who were physical present to celebrate the latest achievement of their daughter.

The event held had in attendance various professionals in the judiciary sector; they include the acting Chief Justice of Nigeria (CJN), Justice Olukayode Ariwoola; Chairman of the Body of Benchers (BOB), Wole Olanipekun; former Justice of the Supreme Court and Vice-Chairman of BOB, Justice Mary Odili; and the Director-General of the Nigerian Law School, Professor Isa Chiroma, among others. 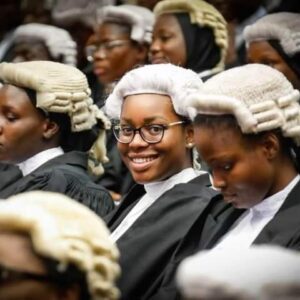 Beaming with smiles and decked in the approved dress code for lawyers in a black coloured dark-colored suit, White Shirt, black flowing gown and Lawyers White band blended with a white wig the newly inducted legal practitioner joined her father who also also adorned a black and white striped coloured suit to take photographs alongside his Wife who also wore a pink coloured suit. 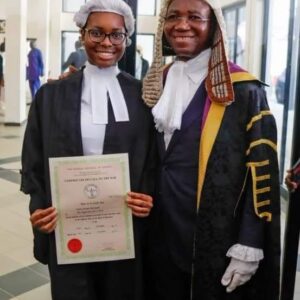 Other Distinguished legal personalities at the event took time to take photographs and share the joyful moments with the Kalu family as they proceeded to engage in other preceding events. 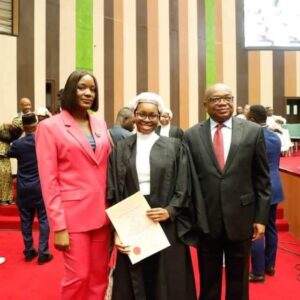