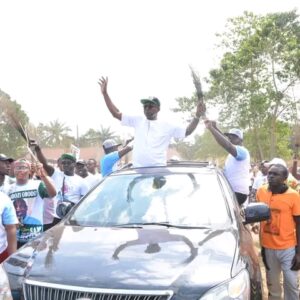 By Ikechukwu Odu
NSUKKA—-The Minister of State for Budget and National Planning, Prince Clem Agba, weekend, said that the All Progressives Congress, APC, has been executing legacy projects which impacts positively on the lives of Nigerians across the geo-political zones in the country.

Prince Agba, who said that the days when political office holders shared I-better-pass-my-neighbour generator to constituents as empowerment items were over, argued that the multi-dimensional poverty index released recently by the Presidency indicated that states where the People’s Democratic Party, PDP, were in control of power topped the chart of poorest states in Nigeria.

He made the statement at Ogbede, Igbo-Etiti Local Government Area of Enugu State when the APC’s House of the Representatives candidate for Igbo-Etiti/Uzo-Uwani Federal Constituency, Chief Sam Ekwueme, unveiled his manifesto and legislative agenda to his constituents.

The Minister also said that Enugu North Senatorial District was the highest deprived in provision of primary healthcare and food security in Nigeria according to the poverty index.

The Minister while urging the constituents to vote APC candidates in the 2023 general elections, argued that if Chief Ekwueme, who has not held any political office before was able to attract the 11.5 kilometer asphalted Aku-Lejja-Nsukka Road, water and power projects to his constituency, he would do more when voted into power.

While addressing the mammoth of party faithful at his constituency office, Chief Ekwueme, said he represents the new order to bring development to his people.

He also said that his constituency has suffered years of neglect from the ruling PDP in the state, adding that if elected, he would empower youths and strengthen security in the constituency.

“So, if I have started these projects before being elected, imagine what would happen if I am elected,” he said.

Some of the party faithful who spoke to newsmen expressed optimism that Chief Ekwueme, has the wherewithal to represent the constituency in the National Assembly. They equally said he would emerge victorious from the poll because of the love his constituents have for him.
_30-

Chief Sam Ekwueme, hailing his constituents during the unveiling of his campaign manifesto.