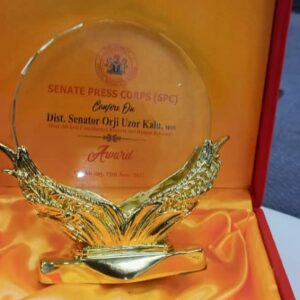 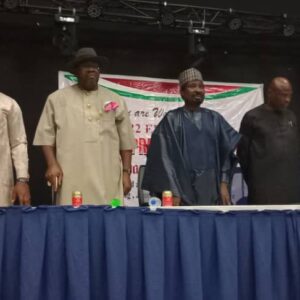 For executing massive developmental projects for his constituents in his Senatorial zone, Chief Whip of the Senate, Senator Orji Uzor Kalu has been honoured with the “overall best constituency projects and human relations award ” at the 2022 Senate press Corps award held in Abuja on Thursday.

The award is organised annually by the Senate Press Corps which is Apex media body of the Senate. The award will be the second in a row bagged by the Abia North legislator in the constituency development category, having won the 2021 edition organised by the apex media body of the  National Assembly.
According to the award organisers ,Kalu who represents Abia-North Senatorial District at the National Assembly defeated other 108 Senators out of 109 to bag the coveted Honour.

Giving reason for the award, Chairman of the Senate Press Mr. James Itodo emphasised that Kalu was bestowed with the award due his efforts in facilitating numerous development projects and empowerment programmes for his constituents.
Itodo added that execution of constituency projects by legislator, particularly at the Federal level is lawmaker on the templates of responsive and responsible representation since the introduction of the idea during the 4th Assembly.

Reeling out Kalu’s achievements Itodo who spoke during the award plaque presentation said that within the last three years,  the number of projects ranging from road construction, construction and reconstruction of schools, hospitals to other basic amenities in Abia state and Abia-North were too numerous to be mentioned.

On human relations the Senate Press Corps noted that Kalu’s financial wherewithal and experience as a former Governor of Abia State in addition to his constant close interactions with his constituents, made it easy for the Abia North parliamentarian to know the exact project needs of his people.
He said ; “As partners with the 9th National Assembly in our progressive democratic strides, this award confirms that indeed the desirable dividends of democracy are gradually taking root in our nation.

“The award is in recognition of the selfless and dedicated service of just a few of our Distinguished Senator that we have singled out for a token appreciation for their conscientious efforts to entrench democratic principles and culture in our polity, particularly in legislature.

The epoch ceremony held at the Nicon luxury hotel, Abuja also had in attendance other distinguished Senators and principal officers of the Senate. They include; President of the Senate, Senator Ahmad Lawan Senator Seraike Dickson, Senator Barau Jibrin, Senator Aliyu Sabi and others.

Since his election in 2019 , Orji Kalu a former Governor of Abia State and first time Senator has within three years facilitated the construction of over 50 roads in his community.

Kalu has also embarked on the construction and reconstruction and equipment of of schools and hospitals as well as distributing learning materials to both staff and students.
In order to boost entrepreneurship and reducing unemployment, Kalu has so far distributed with over 3000 motorcycles, 5000 sewing machines and other items to support agriculture and vocational trades. In this Legislative duty Kalu as sponsored 51 bills at the Senate.