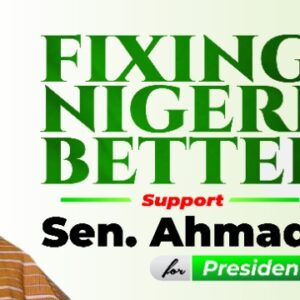 Senate President, Ahmed Lawan alongside the Chief Whip of the Senate, Senator Orji Uzor Kalu and other Senators have arrived Jigawa State as part of consultations ahead of the 2023 presidential election.

The Jigawa consultation is coming after Katsina, Akwaibom, Cross River ahead of the APC National convention scheduled to hold on May 29, 2022.

Lawan’s team arrived Dutse International Airport this afternoon and was received by the deputy Governor of the state , Alhaji umar Namadi.

The Senate President told the congregation of delegates that he had acquired enough experience to lead the country, harping on the need for the country to evolve from an oil-dependent nation to a knowledge-based economy.

Lawan promised to open doors of opportunities for youths if given the opportunity to become President in the 2023 elections.

He said, “I have garnered a lot of experience as a lawmaker as well as in other areas. I know that there are issues that need to be tackled, including security, economy, and so on. We are ready and competent to handle every challenge.

“As a country, we need to create wealth, employment opportunity, we believe in national development. This race is about improving the lives of Nigeria based on the ideals of our party

“Nigeria cannot continue to depend only on oil, there is an urgent need for diversification, and our youths need to be fully part of our economy. We need to invest in education, it is the foundation of the development of every country.
“If you look at a country like Singapore, they had almost nothing, but they invested in their youths through education and that turned their fortunes around.

“We need a knowledge-based economy which can only be built on education as it opens many doors of opportunities, we must invest now.
“The son of a poor person should be able to go to school in the Nigeria we are building. This will make our economy better. If we have trained people and intellectual individuals then we will grow beyond imagination.” He said