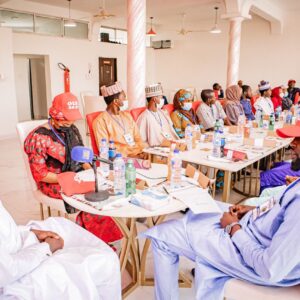 Ahead of the 2023 Presidential elections , Chief Whip of the Senate, Senator Orji Uzor Kalu has continued to receive Torrents of endorsements from the Northern region of Nigeria

The latest among the endorsements is Northern group drawn from the entire 19 Northern states in the country, the group known as the Northern Youths Political Awareness for Orji Uzor Kalu  on Sunday during a special Congress declared their total support for the Senate Chief Whip. 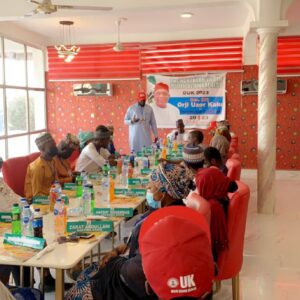 According to the group they resolved  to support credibility in the up-coming 2023 presidential election. At a special congress held in Kano state, the group inaugurated the National executives drawn from all 19 states of Northern Nigeria.

The event that saw the attendance of all the 19 northern coordinators, had in their agenda, the way forward for Nigeria as the 2023 general elections was a major focus 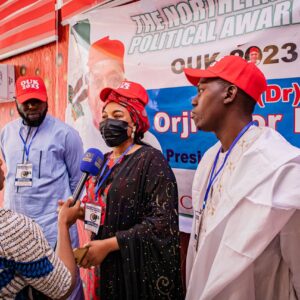 The group’s endorsement comes days after prominent Arewa group declared Orji Kalu as its sole Presidential candidate for the Northern region and asked other Nigerians who have either indicated interest or jostling for the plum office in the All Progressives Congress, APC, to shelve their ambitions.

The Director-General, Arewa Summit International, Dr. Bashir Lamido gave the advice while speaking in Yola, Adamawa State over the weekend.

However on Sunday , the Northern Youth Political Awareness group Speaking during the meeting , the Chairman of the group, Mallam Ibrahim Sabo, enumerated reasons for the endorsement of Senator Orji Uzor Kalu for the job, to succeed Mr President, Mohamadu Buhari.
According to Mallam Sabo, in a statement read to the public, Nigeria needed a way forward, insinuating it’s only Nigerians that can profoundly achieve the solutions needed. The statement read.

“I want to thank all present in this congress for your quality time and contribution to nation building. Am grateful to Allah for his safety, on the distance covered to answer this call of national interests and unity. Your willingness and availability is commended and hopefully, our efforts would be rewarded by the changes we have craved for our nation, Nigeria.

“We can not sweep under the carpet the changes needed by our dear country Nigeria. Economically, socially, infrastructurally and every other area affecting Nigerians. This negativity can be put to an end. we have to put a stop to it. Nigeria is our country, no foreigner can build Nigeria, it is our indigenous duties and responsibilities to build our nation.

“The youths today are facing the  ill torture the economy is melting on the society. Sometimes, it’s unconsciously mortified, ‘what the upcoming generation would look like’, if we’re unable to have a pause, reflect and find solutions to our nation’s economic predicaments.

“The desire to rebuild this nation is the contemporary efforts, seen in the negative, with these unrest in our society and regions of the nation. This negative tendencies could lead to the unknown and for these reasons, We gathered with the views to effect that change, at the leadership helm of the nations affairs, with a right choice for the 2023 presidential race

“Our stand on who succeeds President Muhammadu Buhari should be our foremost step in this revolution to make it right for Nigerians.  For a country like ours, developments to improve our economy can only be productive, when there’s peace and security. Peace can only be achieved when all stakeholders of the United Nigeria are given a sense of belonging with equal rights, fairness and justice, while insecurity is the product of a crumbling economy, where people take shorter cuts to their daily bread, committing atrocities.

“To this effect, with nature facing the wheel of leadership to the southeast, following the trends and standards of our earlier compatriots, engraved in Federal character, which had been observed in sequence, since 1999.

“ It is preeminently unnecessary to thwart what the future has in stock for Nigerians. We believe and stand by this wheel of leadership to favor Nigerians meaningfully, irrespective of the region we’re from (Northern Nigeria), having leaders from the southeast to rally with.

“Having dogged through profiles of leaders from the southeast region, we were able to, at a glance, settle for the likes of the former governor of Abia state and the Senate Chief whip of the 9th Assembly,  Dr Orji Uzor Kalu. He’s indeed a unifier of the highest order. His experiences anchoring on significant ends of the world, is  a quality to recon with in piloting the nations affairs.

“Known beyond his political contributions to Nation building, Dr Orji Uzor Kalu,  gave to himself a first financial address other than politics, at his earlier stage of life, as a businessman of integrated qualities. The trends of his political foot paths could be traced to his grassroots and his endeavors, in public services.

“He’s internationally recognized by the United States of America as a prosperous businessman of good humor, conduct, descent and of great character. He had accumulated to his archives, many other merited and distinguished awards of recognitions from Europe, Asia and Africa continents for human profitable involvements that had in a way, revived the economy of some Africa countries.

“We have the believe that, Dr. Orji Uzor Kalu, a man with such qualities, numerous to mention, would have lot to offer if stood by, in this path of searching for experienced leaders to pilot the nation’s economy and at same time, keep sacrosanct our unity, in line with federal character.

“In this congress, with the powers vested on me as the Northern Youth Awareness for Orji Uzor Kalu,  in the presence of the coordinators from the 19 northern states of the Federal Republic of Nigeria, permit me to categorically unveil publicly and officially our unwavering support for the former governor of Abia State and the Chief whip of the Senate, Dr Orji Uzor Kalu.

“We are assuring the senate chief whip that the cost for  his presidential ticket would be on the shoulders of the Northern Youths Political Awareness for Orji Uzor Kalu, to bear, in this coming 2023 presidential elections.

“We will be committed to the running of his campaigns here in the North, for Dr Orji Uzor Kalu and we will in the shortest time, make public our modalities to achieving a greater Nigeria with the sole interest of nations unity, to be our first anchored priorities.

“We, the Northern Youth Political Awareness for Orji Uzor Kalu, will mount pressures on northern leaders, those with the intentions of vying for the presidency in 2023. Irrespective of the Northern political advantage and  decision making of the nation, the northerners have trust as our trademark and also, we have much  respect for other regions in Nigeria and we stand against any abuse of such political privilege, for Nigeria is a nation married in tribes, religion and culture, The statements concluded.