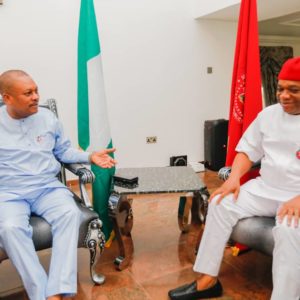 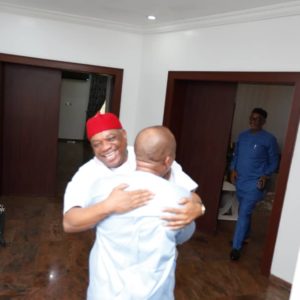 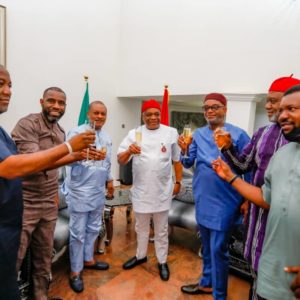 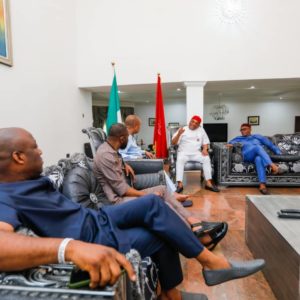 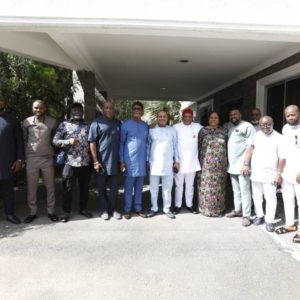 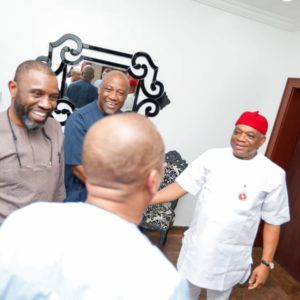 Anyanwu, a former Senator and other newly elected officials of the PDP breezed into Kalu’s Abuja home at precisely 12:28pm.

Disembarking from his vehicle clad in navy blue native attire the visibly delighted National Secretary was welcomed by Kalu’s associates and then led straight with his executives to  meet Orji Kalu.

On sighting one another both men engaged in pleasantries and

embraced each other and then proceeded for an indoor meeting. As the meeting progressed other executives of the party arrived in turns to Kalu’s residence to join the meeting.

The visit comes  amidst strong talks that the former Abia Governor is being positioned for the 2023 presidency to succeed the incumbent President Muhammadu  Buhari.

Recall that on October 30,2021 the PDP elected it’s new set of members from various parts of the country into its National Working Committee (NWC) to take over the leadership of the party.

In 2016 Senator Kalu formally joined the ruling All Progressives Congress, (APC), he contested and won the 2019 Senatorial elections and led the APC to landslide victories for other legislative positions in Abia North. The former Governor also led a strong campaign in his Abia North to become the only zone in the SouthEast to have given  Buhari 68% votes during the 2019 general elections.

Also recall that in 1998, Kalu alongside a few others founded the Peoples Democratic Party (PDP). Kalu solely made an initial donation of N100 million aside a loan of N500 million to the party at the formation stage. He won the governorship contest in Abia State in 1999 on the platform of the PDP. Kalu steered the affairs of the state from 1999 to 2007.

The opposition party (PDP) lost the presidential seat to the All Progressives Congress (APC) both in 2015 and 2019.

In the South-east, the PDP lost grip of a major stronghold, Ebonyi State, to the ruling APC due to the defection of Governor Dave Umahi. The party also lost in the South-South with the unexpected defection of Cross River State Governor Ben Ayade  to the APC.

At the 2021 PDP convention , 3,600 delegates voted for new members of the NWC of the PDP at the convention, with only the office of the Deputy National Chairman (South) and the Youths Leader contested out of the 21 NWC positions.